Italy's Flying Barrel: Is This The Strangest Looking Plane of All Time? 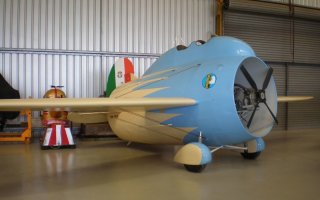 Here's What You Need to Know: Some aeronautical historians see similarities between Stipa’s tubed propeller design and turbofan engines.

After the Second World War, Stipa was convinced that the jet engine owed its development to his design and remained bitter about not receiving recognition. He also firmly believed that the German V-1 rocket engine from World War II was created in violation of his patented design, though the rocket used a radically different design that was powered by controlled explosions rather than a propeller. Some aeronautical historians do see similarities between Stipa’s tubed propeller design and turbofan engines, partially vindicating Stipa and his design.