It's Dangerous To Worry About Overpopulation: Look At What China Did To the Uyghurs 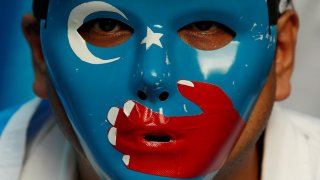 Mounting evidence shows that China has enacted wide‐​ranging human rights abuses, including coercive population control, on its Uyghur minority. An Associated Press investigation released in late June showed that while China’s rate of permanent sterilization procedures is falling nationally, the rate in Xinjiang, where many Uyghurs live, has skyrocketed. Many of those surgeries were involuntary. Many Uyghur women are forcibly sterilized after having two children, as third children are illegal in China. The two‐​child policy replaced China’s previous one‐​child policy in 2016.

The immense cruelty of what is happening to China’s Uyghur population demonstrates the inhumanity of China’s two‐​child policy and the urgency of combating the mindset that undergirds it. The way that the policy is enforced is influenced by prejudice against minorities, but authorities justify the policy with neo‐​Malthusianism, defined as the fear that a large population size could lead to a humanitarian and ecological disaster and that combating so‐​called overpopulation is thus an urgent problem. “The tensions between population and resources and environment will not fundamentally change,” noted China’s State Council in its national population development plan for 2016–2030, released in 2017. The plan specifies, according to state‐​run news agency Xinhua, that the government must continue to implement the “two‐​child policy to promote balanced population development.”

Sadly, the view that some groups are less worthy of having children than others has often gone hand in hand with neo‐​Malthusianism, both historically and today. China’s government subjects Uyghurs to strict enforcement of the country’s two‐​child limit, using overpopulation concerns about resource scarcity in part as a cover to make forcibly decreasing the population of a minority more palatable.

The world is doomed, many people argue, citing poverty, dwindling natural resources, and an allegedly unsustainable rate of population growth. They say there are just too many problems to overcome. But is that really the case? Join the conversation and find out.

The neo‐​Malthusian mindset has caused many people outside of China to turn a blind eye to the coercive nature of the one‐​child (now two‐​child) policy. As recently as 2018, New York University law professor Dan Guttman told Harvard Political Review: “With the one‐​child policy, China put into effect the single most effective climate change rule in the world.”

In fact, Western development professionals originally encouraged China’s birth limits. In 1983, the United Nations Population Fund bestowed an award on Qian Xinzhong, head of China’s State Family Planning Commission and the man in charge of the country’s one‐​child policy, as well as Indira Gandhi, India’s prime minister who declared a national “Emergency” that suspended civil liberties and mandated sterilizations on a massive scale between 1975 and 1977.

Fears that without coercion, China would have seen an environmentally damaging “population explosion” are unfounded. China’s birth rate would have fallen without coercion, in the normal course of economic development. Today, even in Sub Saharan Africa, the world’s poorest region, birth rates are falling voluntarily. Projections of world population growth show that the total population of the planet will decline in the long run. Moreover, population growth can coincide with rising prosperity. China’s remarkable economic growth and poverty eradication over the last few decades have been the result of economic liberalization, not regulating women’s allowable number of births.

While many accounts of coerced sterilization and forced abortion have emerged from the Uyghur community, the Han ethnic majority is not exempt. Even as the Chinese national government now frets about falling birth rates’ impact on the country’s economy, many revenue‐​hungry local governments throughout China continue to fine couples for illegal births and enforce childbearing limits.

For example, last year, one couple in Shandong province, who could not afford a fine of $9,570 for violating family planning regulations had their life savings (around $3,000) seized. Also last year, a school teacher in Guangdong lost her job after giving birth to a third child in violation of the two‐​child policy. There are now many hopeful signs that the Chinese government may move toward ending childbearing limits, but that has not yet come to pass.

Today, neo‐​Malthusian thinking is seeing a resurgence. At the 2020 World Economic Forum in Switzerland, famed primatologist Jane Goodall opined, “All these [environmental] things we talk about wouldn’t be a problem if there was the size of population that there was 500 years ago.” The world population 500 years ago is estimated at 420–540 million people, or around 6.7 billion fewer people than today.

Goodall is far from alone in her belief that population growth is an urgent problem. Public figures, ranging from Prince Harry and Bill Nye “the Science Guy” to television host Bill Maher, have all recently expressed overpopulation fears. Last year, Rep. Alexandria Ocasio‐​Cortez (D-NY) famously questioned the morality of childbearing in the face of climate change, asking, “Is it OK to still have children?”

Countering neo‐​Malthusianism is especially critical now given the recent prominence of such thinking. To learn more about the history of coercive population control inspired by neo‐​Malthusianism, and the problematic policies that persist today—including the forced mass sterilization of Uyghur women—consider reading my new paper, Neo‐​Malthusianism and Coercive Population Control in China and India.

This article by Chelsea Follett first appeared in CATO on July 21, 2020.