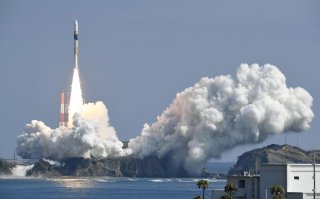 In its first breakthrough since easing restrictions on arms exports in 2014, Japan signed a deal to sell US$100 million worth of advanced air surveillance radars to the Philippines. These radars — fixed and mobile — are built by Japan’s Mitsubishi Electric Corporation (MELCO), one of Japan’s five leading defence production companies.

MELCO has signed a contract with the Philippine defence ministry for the radars, which will reportedly be used for detecting stealth fighter planes and missiles. China is the obvious focus. Tokyo has previously supplied defence-related equipment such as patrol boats to Southeast Asian countries like Vietnam and the Philippines. This was part of Japan’s official development assistance (ODA) under its ‘capacity-building’ program, advancing a Japanese narrative driven by ‘proactive contribution to peace’.

Although donated to the coast guards of the recipient nations, the boats are defence-related products — as one analyst noted, ‘the provision of patrol vessels to the Philippines and Vietnam has a military dimension, even if the official statements declare differently’. Tokyo has also provided TC-90 training planes to the Philippines military and trained Philippine naval pilots to fly the aircraft.

In 2014 Japan introduced a revised set of ‘three principles on transfer of defence equipment and technology’ and in 2015 a new Development Cooperation Charter that gives ODA a ‘strategic edge’. Even before these changes, Tokyo provided ODA loans to Indonesia to purchase patrol vessels for the prevention of ‘piracy, maritime terrorism and proliferation of weapons’. Strictly speaking these vessels do fall under the definition of ‘arms’, but the conditions of sale made them appear to be for purely civilian purposes.

Japan’s earlier attempts to sell military wares abroad either failed or remain under negotiation. Tokyo’s bid to sell its Soryu-class submarines to Australia reached the final stage, but in 2016 the Australian government awarded the multi-billion dollar contract to France. This was a huge disappointment to Japan, as the deal would have been a game changer for its defence industry.

For the last few years, Japan has been in negotiation with India to sell its US-2 amphibian search-and-rescue aircraft made by Shin Maywa and used by Japan’s Maritime Self-Defense Force. The deal progressed almost to completion two years ago, and in a 2018 joint statement the two prime ministers stated that ‘the two sides will continue to make efforts with regard to cooperation on US-2 amphibian aircraft’.

But the proposal has since stalled, reportedly due to reasons of cost and disagreement over technology transfer. The deal seems to be off the table for now, as top leaders of the two nations have not discussed it in recent meetings.

Tokyo was also in discussion with Britain to sell P-1 submarine hunting aircraft made by Japan’s Kawasaki Heavy Industries, the first such proposal outside of the Indo-Pacific region. But this also ended in failure.

Japan’s failures in Australia, India, the United Kingdom and other countries can be ascribed to many factors, from the inexperience of Japanese defence-related companies in the international arms market to the lack of comparative advantage and capacity. Japanese arms are not combat-tested, as most Japanese producers sell their military wares to Japan’s Self-Defense Forces which is not a combat force. Some Japanese companies are also reluctant to aggressively pursue arms sales in the international market because it is not their core business and they don’t want to be labelled as ‘merchants of death’ in the eyes of the Japanese public.

Regional maritime security and safety is one of the major goals of Japan’s free and open Indo-Pacific vision. Southeast Asian nations, many of which face China’s increasing military assertiveness in the South China Sea, are recipients of Japan’s assistance for building surveillance capacity.

Securing its first arms deal in Southeast Asia with the Philippines is a landmark development. The deal shows Japan’s diplomatic acumen in dealing with Philippine President Roderigo Duterte, who is wary of the United States and eager for a close relationship with China. In 2016, the Duterte administration ignored the rulings of the Permanent Court of Arbitration in The Hague that recognised virtually all of the Philippines’ claims in the South China Sea.

The same administration has now been persuaded by Tokyo — a US ally and competitor of China — to equip itself with surveillance radars to keep a closer eye on China’s military activity around the Philippine coastline. This deal has given substance to the Abe government’s 2016 agreement with the Philippines on the transfer of defence equipment and technology.

This was a first step in the former Abe administration’s larger plan to make Japan an arms-exporting country by revising the three principles on arms exports in 2014. New Prime Minister Yoshihide Suga is likely to follow this course as evidenced by his first overseas trip to Vietnam and Indonesia, but any large deals seem a ways off — Japanese manufacturers first need to upscale and vigorously pursue the international market. This is unlikely in the near future, as Japanese companies remain sensitive to public sentiments that largely oppose Japan’s arms exports.