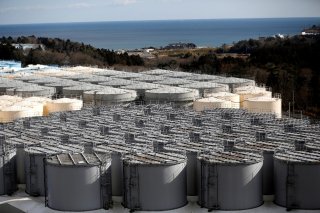 The Japanese government recently announced plans to release into the sea more than 1 million tonnes of radioactive water from the severely damaged Fukushima Daiichi nuclear plant.

The move has sparked global outrage, including from UN Special Rapporteur Baskut Tuncak who recently wrote,

I urge the Japanese government to think twice about its legacy: as a true champion of human rights and the environment, or not.

Alongside our Nobel Peace Prize-winning work promoting nuclear disarmament, we have worked for decades to minimise the health harms of nuclear technology, including site visits to Fukushima since 2011. We’ve concluded Japan’s plan is unsafe, and not based on evidence.

Japan isn’t the only country with a nuclear waste problem. The Australian government wants to send nuclear waste to a site in regional South Australia — a risky plan that has been widely criticised.

In 2011, a massive earthquake and tsunami resulted in the meltdown of four large nuclear reactors, and extensive damage to the reactor containment structures and the buildings which house them.

As of last month, this totalled 1.23 million tonnes. Currently, this water is stored in more than 1,000 tanks, many hastily and poorly constructed, with a history of leaks.

How does radiation harm marine life?

If radioactive material leaks into the sea, ocean currents can disperse it widely. The radioactivity from Fukushima has already caused widespread contamination of fish caught off the coast, and was even detected in tuna caught off California.

Ionising radiation harms all organisms, causing genetic damage, developmental abnormalities, tumours and reduced fertility and fitness. For tens of kilometres along the coast from the damaged nuclear plant, the diversity and number of organisms have been depleted.

Of particular concern are long-lived radioisotopes (unstable chemical elements) and those which concentrate up the food chain, such as cesium-137 and strontium-90. This can lead to fish being thousands of times more radioactive than the water they swim in.

Failing attempts to de-contaminate the water

In recent years, a water purification system — known as advanced liquid processing — has been used to treat the contaminated water accumulating in Fukushima to try to reduce the 62 most important contaminating radioisotopes.

But it hasn’t been very effective. To date, 72% of the treated water exceeds the regulatory standards. Some treated water has been shown to be almost 20,000 times higher than what’s allowed.

One important radioisotope not removed in this process is tritium — a radioactive form of hydrogen with a half-life of 12.3 years. This means it takes 12.3 years for half of the radioisotope to decay.

Tritium is a carcinogenic byproduct of nuclear reactors and reprocessing plants, and is routinely released both into the water and air.

The Japanese government and the reactor operator plan to meet regulatory limits for tritium by diluting contaminated water. But this does not reduce the overall amount of radioactivity released into the environment.

How should the water be stored?

The Japanese Citizens Commission for Nuclear Energy is an independent organisation of engineers and researchers. It says once water is treated to reduce all significant isotopes other than tritium, it should be stored in 10,000-tonne tanks on land.

If the water was stored for 120 years, tritium levels would decay to less than 1,000th of the starting amount, and levels of other radioisotopes would also reduce. This is a relatively short and manageable period of time, in terms of nuclear waste.

Then, the water could be safely released into the ocean.

This is what happens at our national nuclear facility at Lucas Heights in Sydney. The vast majority of Australia’s nuclear waste is stored on-site in a dedicated facility, managed by those with the best expertise, and monitored 24/7 by the Australian Federal Police.

But the Australian government plans to change this. It wants to transport and temporarily store nuclear waste at a facility at Kimba, in regional South Australia, for an indeterminate period. We believe the Kimba plan involves unnecessary multiple handling, and shifts the nuclear waste problem onto future generations.

The proposed storage facilities in Kimba are less safe than disposal, and this plan is well below world’s best practice.

The infrastructure, staff and expertise to manage and monitor radioactive materials in Lucas Heights were developed over decades, with all the resources and emergency services of Australia’s largest city. These capacities cannot be quickly or easily replicated in the remote rural location of Kimba. What’s more, transporting the waste raises the risk of theft and accident.

And in recent months, the CEO of regulator ARPANSA told a senate inquiry there is capacity to store nuclear waste at Lucas Heights for several more decades. This means there’s ample time to properly plan final disposal of the waste.

The legislation before the Senate will deny interested parties the right to judicial review. The plan also disregards unanimous opposition by Barngarla Traditional Owners.

The Conversation contacted Resources Minister Keith Pitt who insisted the Kimba site will consolidate waste from more than 100 places into a “safe, purpose-built, state-of-the-art facility”. He said a separate, permanent disposal facility will be established for intermediate level waste in a few decades’ time.

Pitt said the government continues to seek involvement of Traditional Owners. He also said the Kimba community voted in favour of the plan. However, the voting process was criticised on a number of grounds, including that it excluded landowners living relatively close to the site, and entirely excluded Barngarla people.

Kicking the can down the road

Both Australia and Japan should look to nations such as Finland, which deals with nuclear waste more responsibly and has studied potential sites for decades. It plans to spend 3.5 billion euros (A$5.8 billion) on a deep geological disposal site.

Intermediate level nuclear waste like that planned to be moved to Kimba contains extremely hazardous materials that must be strictly isolated from people and the environment for at least 10,000 years.

We should take the time needed for an open, inclusive and evidence-based planning process, rather than a quick fix that avoidably contaminates our shared environment and creates more problems than it solves.

It only kicks the can down the road for future generations, and does not constitute responsible radioactive waste management.

The following are additional comments provided by Resources Minister Keith Pitt in response to issues raised in this article (comments added after publication):

(The Kimba plan) will consolidate waste into a single, safe, purpose-built, state-of-the-art facility. It is international best practice and good common sense to do this.

In assessing community support, the government also considered submissions received from across the country and the results of Barngarla Determination Aboriginal Corporation’s own vote.

The vast majority of Australia’s radioactive waste stream is associated with nuclear medicine production that, on average, two in three Australians will benefit from during their lifetime.

The facility will create a new, safe industry for the Kimba community, including 45 jobs in security, operations, administration and environmental monitoring.