Japan's Best Battleship Was a True Killer, But It Couldn't Stop America 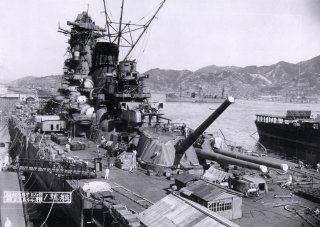 Here's What You Need to Remember: The battleship Yamato was among the largest and most powerful battleships of all time, but it did nothing to save Okinawa from the Allies.

In early 1945, the Imperial Japanese Navy made a difficult decision: it would sacrifice the largest, most powerful battleships ever built to protect Okinawa, the gateway to Japan’s Home Islands. The decision sealed the fate of the battleship Yamato and its crew, but ironically did nothing to actually protect the island from Allied invasion.

The battleship Yamato was among the largest and most powerful battleships of all time. Yamato has reached nearly mythical status, a perfect example of Japan’s fascination with doomed, futile heroics. Built in 1937 at the Kure Naval Arsenal near Hiroshima, it was constructed in secrecy to avoid alarming the United States. Japan had recently withdrawn from the Washington Naval Treaty, which limited battleship tonnages, and was free to build them as large as it wanted.

All of this firepower was meant to sink enemy battleships—more than one at a time if necessary. The extremely large number of antiaircraft guns, added during a refit, were meant to keep the ship afloat in the face of American air power until it could close within striking range of enemy ships.

By early 1945, Japan’s strategic situation was grim. Japanese conquests in the Pacific had been steadily rolled back since the Allied landings on Guadalcanal in August 1942. The Philippines, Solomons, Gilberts and Carolines had all been lost and the enemy was now literally at the gates. Okinawa, the largest island in the Ryukyu island chain was the last bastion before the Home Islands itself. The island was just 160 miles from the the mainland city of Kagoshima, coincidentally the birthplace of the Imperial Japanese Navy.

Allied naval forces in and around Okinawa were the obvious target, and the massive fleet braced itself accordingly. Six older battleships from the Gunfire and Covering Support Group, or Task Force 54, under Rear Admiral Morton Deyo, prepared to defend the invasion force, but were pulled away in favor of an air attack.

At 0800 hours on April 7, scout planes from Admiral Mitscher’s Fast Carrier Force, or Task Force 58, located Yamato, still only halfway to Okinawa. Mitscher launched a massive strike force of 280 fighters, bombers and torpedo planes, and the fight was on.

For two hours, the Surface Special Attack Force was subjected to a merciless aerial bombardment. The air wings of eleven fleet carriers joined in the attack—so many planes were in the air above Yamato that the fear of midair collision was real. The naval aviators were in such a hurry to score the first hit on the allegedly unsinkable ship plans for a coordinated attack collapsed into a free-for-all. Yamato took two hits during this attack, two bombs and one torpedo, and air attacks claimed two escorting destroyers.

Yamato had taken ten torpedo and seven bomb hits, and was hurting badly. Despite counter-flooding, the ship continued to list, and once it reached thirty five degrees the order was given to abandon ship. The captain and many of the bridge crew tied themselves to their stations and went down with their ship, while the rest attempted to escape.

This first appeared in 2016, and is being reprinted due to reader interest.