Jim Baker vs. Rudy Giuliani: How To Win a Contested Election (And How Not To): 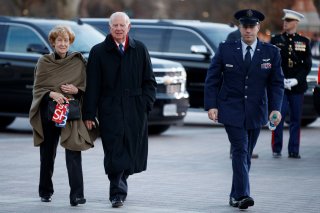 With Rudy Giuliani flailing through a series of failed election challenges for the Trump campaign, a superb new political biography provides fresh evidence of just how stark the contrast is between the head of Trump’s legal team and George W. Bush’s hyperprepared, efficient and savvy commander-in-chief for the 2000 election political and legal fight, James A. Baker III.

The biography “The Man Who Ran Washington,” by Peter Baker and Susan Glasser, provides at least three new major revelations, even for those of us election law experts steeped in that 2000 saga, which culminated in the Supreme Court’s Bush v. Gore decision and Bush’s consequent victory.

But after being strong-armed to relinquish being secretary of state and take over George H.W. Bush’s floundering 1992 reelection campaign, Baker failed. That failure, some claim, created a rift in one of the most important political friendships of the late 20th century.

So when Baker got the call the morning after the 2000 election to take command of George W. Bush’s effort to gain the White House, Baker saw it as an opportunity to redeem himself with the Bush family.

The book’s first revelation comes immediately: 45 minutes after being briefed on the situation that morning of Nov. 8, when Bush’s lead in Florida stood at 1,784 votes out of nearly 3 million cast – and before even a machine recount had taken place that would cut that lead by two-thirds – Baker told others: “We’re heading to the Supreme Court.”

When they expressed surprise, Baker followed up by saying: “It’s the only way this can end.”

Baker’s acumen here was stunning. At this stage, and even later in the saga, a large majority even of election law and Supreme Court experts were highly skeptical that the court would get involved at all.

The widely shared view was that the process of recounts would be resolved completely under Florida law and through Florida’s administrative processes and courts. That’s how election challenges, even in federal elections, had always been handled. Baker’s first choice to lead the litigation effort, former Senator John Danforth of Missouri, reflected this common view.

Danforth told Baker, “I just can’t conceive that a federal court’s going to take jurisdiction over a matter relating to state election law … I just can’t believe that.”

Danforth nevertheless agreed to take on the role. But Baker decided Danforth didn’t believe enough in the cause, cut him loose and turned instead to a former Reagan administration high-level attorney, Ted Olson, who ultimately won in Bush v. Gore. Baker’s immediate judgment that the Supreme Court would become the ultimate decision-maker structured everything he did.

The second revelation in the book is highly disturbing, if accurate.

Litigating the outcome of the 2000 election began with the Gore campaign filing requests under Florida law for manual recounts in four counties. Two weeks after Election Day, the litigation made its first appearance before the Florida Supreme Court. Just before the argument was about to begin, Baker was reportedly handed a note from an intermediary who somehow knew that the Florida justices had already decided among themselves that they were going to rule against Bush and had written a draft opinion to that effect.

Given the time urgency to resolve the election, it is neither surprising nor troubling that the court would have moved this quickly and already drafted a decision. But for a party to a case to be told that, and how the court was going to rule, is a remarkable breach in the confidentiality of a court’s internal deliberations.

Once they got this note, Bush’s lawyer for the argument, Michael Carvin, asserts they decided “to lose and lose big,” in order to bait the Florida Supreme Court into a broad decision that would make U.S. Supreme Court intervention more likely.

Whether Carvin’s self-serving strategic claim is accurate or not, that’s exactly what happened. The Florida Supreme Court approved a manual recount and ordered the deadline for certifying the outcome extended by 12 days. The U.S. Supreme Court – to the surprise of many – agreed to hear the case. When it did so, the Supreme Court then unanimously vacated the Florida court’s decision, in the first of the United States Supreme Court’s two decisions concerning the 2000 election.

The third revelation involves an issue that has swirled around the current election: the possible role of state legislatures in directly appointing presidential electors, rather than permitting the will of the voters to determine who has won the presidential election – and hence the electors – in that state.

Federal law permits a state legislature to appoint electors if the election has “failed” in that state – a term whose meaning the law does not clarify.

No legislature has invoked this “failed” election provision since at least the Civil War, but there was a great deal of concern in 2020 that the Trump campaign’s strategy was to get Republican legislatures in battleground states to do so.

The closest the U.S. has ever come to that happening is Florida in 2000. After the Florida Supreme Court decision that the Bush campaign lost, Baker asserted to the press that the Florida court had changed the rules after the election, by approving a manual recount and extending the deadline for certifying the election by 12 days.

Then Baker threatened: “So one should not now be surprised if the Florida legislature seeks to affirm the original rules.”

And indeed, in early December, the Florida legislature announced it would convene a special session to discuss appointing Florida’s electors itself.

That much is a matter of public record. But what the new biography reveals is that, while Baker wanted this to be seen as a threat, he did not want Florida’s legislature to go through with it.

Baker presumably wanted the shadow of imminent legislative action to spur the courts to bring closure to the recount process, given that Bush was ahead in the count.

Throughout the process, Baker was just as focused on public perceptions as on the courtroom battles. He believed that, if Florida’s legislature appointed the electors in favor of Bush, it would cripple Bush’s presidency from the start by undermining the legitimacy of his election.

Those most involved in the 2000 election contest believe that the looming specter of Florida legislative involvement effectively shaped the overall environment in the way Baker aimed to do. Six days after the Florida legislature’s action, the 5-4 Supreme Court final decision in Bush v. Gore ended the recount, without any further action from the Florida legislature – the path to Bush’s victory that Baker had envisioned from the start.

In contrast to the Trump campaign’s litigation this year, with lawyers filing claims, then withdrawing from cases, and new teams of lawyers swooping in at the last minute, Baker’s firm hand at knowing how to structure effective organizations also played a prominent role in Florida in 2000.

Not only did he quickly assemble the most talented conservative lawyers in the country, but, as one example, he assigned different teams of attorneys to state and federal court, to enable greater specialization.

Some Democrats will never forgive Baker, nor the Supreme Court, for their roles in ending the recount before all the ballots were counted – though a consortium of major newspapers later determined that if the recount had been completed, Bush would have won under 21 of 24 possible standards for what constituted a valid vote.

But Democrats involved in the litigation battles knew the other side had the more effective leader. Indeed, the new Baker biography claims that when Baker was put in charge of the Florida contest, his “reputation was so formidable that Democrats knew they would lose the moment they heard of his selection.”

I can confidently say that thought did not cross the mind of any Democrat when Rudy Giuliani was put in charge this time around.