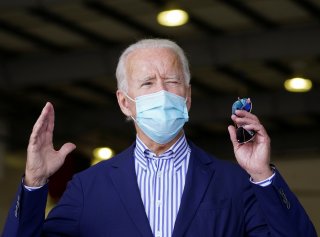 This week, we’ve seen a handful of new polls on the presidential contest. Zogby gave Biden a two-point lead, and Investor’s Business Daily put him ahead by three. The NBC News/Wall Street Journal poll has Biden up by 14 points, and the CNN/SSRS poll has it at +16 for Biden. The Economist/YouGov poll has Biden up by eight. Who is right?

The simple answer is that we don’t know. Let’s look at some of the factors that might produce these different results. President Trump announced that he has tested positive for COVID-19 on Friday, October 2 at 1 a.m. The online Zogby Strategies/EMI Research Solutions interviewing of 1,006 likely voters began that Friday night, October 2. The CNN/SSRS poll was a telephone poll (landline and cell), conducted October 1–4, after the debate, but partly before the president’s COVID-19 diagnosis announcement. The results are based on 1,001 likely voters. The NBC News/Wall Street Journal reported results from 800 registered voters and was conducted by phone September 30–October 1. The Economist/YouGov poll interviewed 1,500 registered voters October 4–6. So, the different modes of interviewing (online vs. telephone) could contribute to the differing results, as could the times the polls were conducted or the types of samples the pollsters used (e.g. likely voters or registered voters). Some of these polls asked the vote intention question first, getting people’s instant reaction to the question; others had it after a series of questions about other aspects of the election.

One of the challenges the pollsters have in every election is to decide who will turn out. To account for this, pollsters weight their sample responses to their best projections of the real electorate. Census data provides benchmarks on basic demographic variables such as age and levels of education, and pollsters use the latest Census data which they adapt for actual voters. What the Census can’t tell us, however, is the partisan composition of the electorate. Will many more Democrats vote than usual? Or more Republicans than in the past? In the National Election Pool’s exit poll from the presidential election in 2016, 36 percent self-identified as Democrats, 33 percent as Republicans, and 31 percent as independents. In 2018, those responses were 37 percent Democrat, 33 percent Republican, and 30 percent independent. Using the 2016 benchmark, one could assume that the electorate has not changed its partisan stripes over four years. While the 2018 numbers are more recent, in off-year elections, the party out of power usually has an edge. This summer, Gallup found that Democrats had gained substantial ground. Republicans had a two-point advantage in January; Democrats had an 11-point lead in June. Gallup was surveying adults and not people who were registered to vote, but it does suggest that the ground may be shifting.

Pollsters also work to correct problems they have had in the past. In some key Midwestern industrial states in 2016, more people with a college degree took pollsters’ surveys than those with no college, and adjustments were not made in some cases to match the state’s actual college-non-college population, throwing off the results. Pew Research Center research analyst Nick Hatley and director of survey research Courtney Kennedy have a thorough discussion of this issue here.

Each of the polls mentioned above was conducted a month before an election in which every day seems to bring some momentous new development. Voters seem very firm in their choices, and today’s hazy snapshots will clear up on Election Day.