Joe Biden Could Do This: Democrats Look to Extend Child Tax Credit 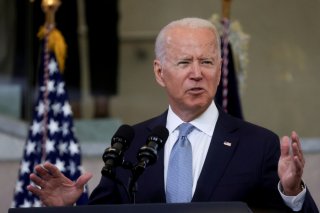 Earlier this month, the first batch of advance monthly payments from the expanded child tax credits worth roughly $15 billion were sent out to about thirty-five million families across the United States.

For many of them, these modest payments of $250 or $300 for each child will considerably help them ease some of the financial struggles they have encountered amid the ongoing coronavirus pandemic.

But what will happen when next year rolls around and these recurring monthly payments suddenly come to a stop?

Valerie Jarrett, a former senior advisor to President Barack Obama, hopes that it won’t ever come to that.

“I strongly believe it should be permanent. It’s helping hardworking families,” she said in a recent interview on Yahoo Finance Live.

“There are countless families around our country that are still struggling. We have to make sure that we have resources available to bring our children out of poverty. So many working families, particularly working moms, have been stuck in this horrible limbo of not being able to afford child care for their children so that they can go back and work,” she continued.

Recent reports and studies are indeed supporting claims that the credits would substantially reduce child poverty in the country. One report put together by the Annie E. Casey Foundation showed that a permanent expansion of the child tax credit could potentially lift more than four million children out of poverty.

“Every child needs food, health care and safe and stable housing. Millions of households with children already lacked these necessities before the pandemic,” the report contends.

“To continue on progress already made on recovery, the foundation recommends: making the expansion of the federal child tax credit permanent,” it continues.

In addition, the Center on Poverty and Social Policy at Columbia University has estimated that the credits will eventually cut U.S. poverty by more than half.

Jarrett added that “what President Biden is doing is redefining infrastructure, not just roads and bridges, but infrastructure to support working families so that they are able to go back to work and get the skills that they need to compete for the jobs of the future.”

She continued: “This more holistic approach to rebuilding our economy positions the United States to be globally competitive.”

“We have a real opportunity to not just throw money at a problem, but to ... lift up all children and families,” DeLauro told reporters during a recent press conference.