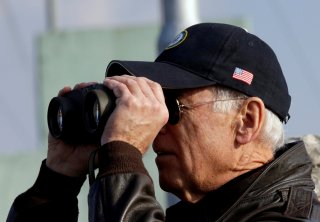 Here's What You Need to Remember: The Korean DMZ is almost certainly the most heavily armed place on Earth. In the event the unthinkable happens, the presence of three large armies on the Korean Peninsula and their associated firepower would make the otherwise peaceful 2.5-mile-by-160-mile strip (which doubles as a wildlife refuge) one of the deadliest battlegrounds ever conceived.

Kyle Mizokami is a defense and national-security writer based in San Francisco who has appeared in the Diplomat, Foreign Policy, War is Boring and the Daily Beast. In 2009, he cofounded the defense and security blog Japan Security Watch. You can follow him on Twitter: @KyleMizokami. This article is being republished due to reader interest.