Joe Biden Should Move for a Free Trade Agreement with Taiwan 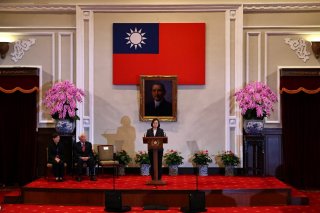 My AEI colleagues Derek Scissors, Michael Mazza, and I have already made the economic and strategic case for the US to negotiate a free trade agreement with Taiwan. With Joe Biden’s victory in the US presidential election, the issue becomes more urgent.

As I noted previously, under the congressional grant of trade negotiating authority to the president, he must notify Congress 90 days before starting negotiating sessions with another country or countries. But the president can then time the beginning of such negotiations and delay if necessary. Such a delay occurred under the Obama administration, which inherited the Trans-Pacific trade pact with 11 other nations from the Bush administration.

US Trade Representative Robert Lighthizer (like his boss) has generally adopted a narrow and transactional approach to trade negotiations. Thus, despite strong bipartisan pressure, he has resisted moving forward with Taiwan FTA negotiations for fear of jeopardizing the so-called Phase One deal with Beijing, under which China has agreed to purchase billions of dollars of US agricultural products. As the Peterson Institute has calculated, however, China is not living up to the agreement, and in any case, at this point larger geostrategic factors in the US-China “cold war” should assume the first priority.

Lighthizer has intervened to oppose efforts by the State Department and National Security Council to advance Taiwan trade talks. If this obduracy continues, Secretary of State Mike Pompeo and possibly Deputy US National Security Advisor Matt Pottinger could and should step in to persuade the president that launching negotiations with the vibrant Taiwanese democracy would enhance his foreign policy legacy.

Inheriting the notification of US-Taiwan FTA negotiation during the lame-duck session would ultimately be a welcome gift to President Biden. He would be under no obligation to move forward immediately and— as President Obama did — could time any future negotiations (or scuttling the deal) to fit his own larger policy goals.

Mr. Biden has stated clearly that his first policy initiatives will be on domestic issues — COVID-19 and the state of the US economy. Thus, it is almost certain that trade negotiations are off the table for much of the first year of a Biden administration — except possibly for continuing already launched deals with the UK and Kenya. Further complicating things is the fact that the congressional grant of trade negotiating authority to the president expires in July 2021, and renewal will be difficult, particularly if the Republicans retain the Senate.

Finally, there is strong bipartisan support for a Taiwan FTA — weeks ago, some 50 senators from both parties signed a letter urging the Trump administration to move on the Taiwan trade talks. As I have argued in the past, a US-Taiwan FTA does not implicate questions of Chinese claims of sovereignty over this island of democracy. Taiwan’s international legal status is firmly established — and agreed to by China as a condition of its own membership in the World Trade Organization.

Taiwan should join the UK and Kenya as pending actions for the Biden administration.