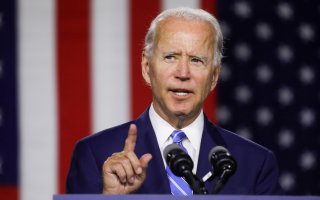 The ever‐​fading hope that a Biden administration would look fondly on free trade is becoming more of a free trader’s dying wish than a realistic expectation. The problem with this narrative, of course, was the Trump administration’s embrace of a laundry list of ideas long held by Congressional Democrats, which made them more likely to agree with him than to oppose him on these measures. Instead of confronting the dangers of the Trump administration’s trade agenda, embracing a “progressive” case for free trade, and aligning its campaign with a Democratic base that increasingly views free trade more positively, the Biden campaign’s newly released supply chain “resilience” plan shows more interest at besting Trump at his own protectionist game. That’s bad news for those who held out hope that a Biden administration would be different.

Within the plan sits a mess of protectionist and counterproductive policies that would have been associated with the political fringe less than a decade ago – and certainly a plan with enough trade restrictions to make the Trump administration blush. In fact, the plan has managed to win the approbation of former Trump advisor Steve Bannon. That’s not a good sign. Let’s take a look at five big issues with the Biden camp’s proposal.

The myth that never dies. Worse, it continues to buttress poorly conceived campaign proposals such as Biden’s new supply chain plan. The United States manufacturing sector is not dead. Just last year, before being devasted by the pandemic, U.S. manufacturing output set a record high. And the sector once again proved itself an attractive destination for investment in 2018 when FDI stock in American manufacturing rose by 10% to $1.77 trillion. Decline in American manufacturing employment, however, has long been a story of American progress, as the sector has stayed competitive by learning how to do more with less. Using the decline in employment to tell a story of sectoral decline, not progress, is a mistake – and it’s a mistake that permeates the rest of the proposal.

My colleague, Inu Manak, and I recently dissected the pervasive and misdiagnosed idea that our supply chains are fragile and in need of saving. By several objective measures, the United States is one of the least “dependent” countries in the world. Trade accounts for a smaller share of domestic output than every country in the world other than Cuba and Sudan. Amongst the world’s largest economies, the United States also ranks near the bottom in import penetration of goods and services, indicating that America is less reliant on other countries to satisfy domestic demand than many of our peers. Shortages of needed medical products, on the other hand, was much more a failure of government than it was a failure of supply chains or domestic production. A long list of domestic regulations, documented by my colleagues at the Cato Institute, shows how “one‐​size‐​fits‐​all” regulations, and restrictions on services such as telemedicine and barriers to the free flow of labor such as occupational licensing laws, kneecapped recovery efforts. Using the government to reshape supply chains would be a mistake – especially when it was so instrumental in America’s uniquely slow response.

The most puzzling claim in Biden’s plan is that his proposals would avoid costs and bureaucracy. Monitoring supply chains alone would demand a massive expansion in government capacity and, as Professor Henry Farrell argues, this would require “new bureaucracies, extensive reporting requirements, and the transformation of network analysis into a tool of security analysis.” Forging public‐​private relationships and monitoring supply chains means the government would need the ability to effectively pick the right winners and losers. Picking correctly is difficult. Picking correctly without an expansion of costs and bureaucracy is unimaginably arrogant and outright impossible.

Yes, over 70% of the API manufacturing facilities that supply the U.S. market are located in foreign countries, but the same statistics the Biden proposal cites also say the United States houses 28% of the world’s API facilities. Using his own statistics, America has more API manufacturing facilities than any other country in the world. For a proposal that makes an effort to reprimand the Trump administration for not working with U.S. allies (and rightfully so), it’s worth mentioning that the European Union ranks second at 26%, and China – the country that typically tops the list of U.S. trade‐​related security concerns – is home to only 13% of the world’s API facilities.

Some libertarians have entertained the idea of reforming and expanding the federal stockpile. After all, preparing for a pandemic, most libertarians would agree, is a legitimate and necessary role for government. But the Biden plan neuters one of the stockpile’s most important advantages. Instead of using the stockpile to subvert protectionist demands, the Biden campaign seems more inclined to use it as a tool to further entrench protectionism through federal procurement policies. Needlessly limiting sourcing options for the stockpile would limit competition by requiring that the government discriminate against equally effective foreign products. That, in turn, makes it more expensive to replenish the stockpile’s inventory by limiting supply. And more expensive products translate to more funding demands – and funding battles over the stockpile were part of the reason we were having supply issues to begin with. The stockpile’s inventories were depleted fighting the H1N1 virus and other natural disasters during the Obama administration, but funding became a political football and neither the Trump administration nor the Obama administration were willing to expend the political capital necessary to secure the proper resources. Making the stockpile’s contents more expensive will only make matters worse. The recent funding history exposes protectionism and stockpiling as a particularly dangerous combination – but it’s also plainly a poor public health decision.

Of course, there is more in this plan that’s bothersome. But free traders better hope the Biden plan was solely an ill‐​conceived campaign tactic, and not an indication of how he would govern. Biden was given an opportunity to embrace free trade and distance himself from Trump’s disastrous trade policies. Choosing this path just means more of the same.

This article by Logan Kolas first appeared at the Cato Institute.