Joe Biden's Plan for Free College Is a Mistake 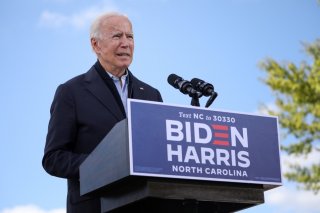 It hasn’t been much discussed in the presidential campaign—personality, scandal, and COVID-19 have dominated that—but the idea of spending big taxpayer bucks for “free” college still looms. The Biden campaign is proposing free tuition at four‐​year public colleges for anyone in families earning less than $125,000 a year, and free community college for all, among many promises to lavish taxpayer money on ivory towers. The basic justification seems intuitive: education is good, more education must be better.

But “intuition” and “reality” are not always the same, and pushing more money and people into college in the name of “education” would be like shoveling raw meat into an obese dog in the name of “nutrition.” You can have way too much of a basically good thing.

Let’s start with some money info.

The way the argument goes for drastically increased federal higher education funding is that colleges have had to suck more and more money out of students as state and local governments, which directly fund public four‐​year institutions and community colleges, have been cutting their subsidies. But that is not what the data show.

The State Higher Education Executive Officers Association (SHEEO) helpfully publishes lots of data on public college finances going back to 1980. What they show is that public colleges have increased what they take in through student charges far beyond what they have needed to make up for any lost state and local revenue. This is the case whether inflation is adjusted using the Higher Education Cost Adjustment (HECA), which is supposed to pinpoint costs faced by colleges, or the Consumer Price Index (CPI), which is based on a basket of goods and services families and individuals typically consume. HECA tends to indicate smaller revenue gains for colleges because the prices in its bundle of goods and services have risen faster than what is tracked with CPI, making adjusted past‐​year costs seem higher.

In terms of overall revenue, as you can see below, public colleges have done far more than just make up for lost state and local support. Using HECA, state and local support rose from about $72 billion in 1980 to more than $103 billion in 2019. Meanwhile, revenue through tuition and fees, net of aid using state and institutional funds, went from $16 billion to $75 billion. Both rose markedly, taking total, inflation‐​adjusted revenue from $88 billion to $178 billion. Using CPI (not shown) the total increases were even bigger.

On an absolute basis, state & local governments have not gotten increasingly tight‐​fisted. How about on a per‐​student basis?

Here one could say that state & local governments haven’t kept up, but only using HECA. And it still does not explain increased revenue through students.

Using HECA, state and local support per student dropped from $10,450 to $9,460 because of huge enrollment increases: from about 6.9 million full‐​time equivalent students to almost 11 million. Meanwhile, per‐​student tuition revenue rose from $2,292 to $6,902. So while state and local support fell $990, money through students rose by $4,610. Even using the index “friendliest” to higher ed, the idea colleges have just been keeping their heads above water is bunk.

Were those big enrollment increases off of which colleges made big bucks at least worthwhile? Did they provide much needed human capital to the American economy? The data are clear: No. We have a glut of degrees, not a deficit.

The first thing we know is that, as the New York Fed has reported, about one‐​third of people with degrees are in jobs that do not require them, and this has been consistently the case since 1990.

But isn’t that going to change? Not anytime soon according to Bureau of Labor Statistics (BLS) data, which show that only about 38 percent of jobs currently require any formal postsecondary education for entry, and only 27 percent require a bachelor’s degree or higher. Yet almost 70 percent of recent high school completers enroll in college. By 2029 the BLS predicts no substantial change in the share of jobs requiring any formal postsecondary ed for entry, with the total rising only to 39 percent, and bachelor’s or higher only to about 28 percent. And even if we see more employers asking for degrees for more job openings it might just be due to a flood of degrees making that easy, not employers hotly pursuing a bunch of valuable, new human capital. As literacy rates in 1992 and 2003 show, college grads and above saw big literacy drops, strongly suggesting degree inflation: more degrees represent less learning on average.

The evidence does not support the federal government paying for more people to go to college. Indeed, it points the opposite way – society would be better off with far less emphasis on the collection of sheepskins.