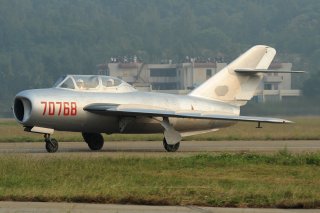 Here’s What You Need to Remember: North Korea’s Korean People's Army Air Force (KPAAF)—referred to as the Air and Anti-Air Force Command in South Korean documents—is not in the top ranks of the world’s air forces.

However, the North Korean forces are fanatically devoted to Kim Jong-Un and the Kim regime—which more resembles a Confucian monarchy with Stalinist stylings than Soviet-style communism. The regime’s survival is their survival, and thus the so-called Korean People’s Army is dedicated to its supreme leader and is likely to put up a fanatical defense in the event of a renewed war.

If for example, if war were to break out and a North Korean J-5 was to cross into South Korean airspace in an attempt to attack a ground target, the allied force would shoot it down. But even a single Patriot PAC-3 missile costs more than $3 million. Moreover, interceptor missiles are usually salvoed in pairs during an operational launch. Thus while North Korea loses an antique J-5, the United States would have expended $6 million and used up a portion of its missile inventory that might have been better utilized to defend against a more important threat such as a ballistic missile. Even an air-to-air missile shot using an AMRAAM would cost well over a million dollars—especially if it was a late model AIM-120D.