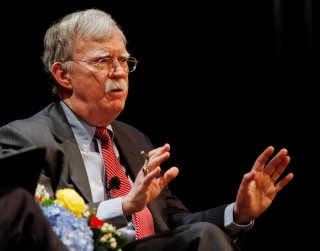 John Bolton is opinionated, self-righteous and a notorious hawk. By the time he left his job as US national security adviser, his disagreements with his boss, President Donald Trump, had escalated to the point where they couldn’t even agree on whether he was fired or quit. Under the circumstances, how could his memoir be objective?

However, Bolton spent 17 months at the heart of global decision-making, has an eye for political detail and is legendary for his note-taking. Can anyone interested in knowing what went on in Trump’s Oval Office between April 2018 and September 2019 afford to miss The room where it happened: A White House memoir simply because it is biased?

The book’s greatest strength lies in its detailed inside accounts of events during the author’s tenure. Indeed, Bolton’s revelations proved so sensitive that the Justice Department has launched a criminal investigation to determine whether he illegally disclosed classified information.

During his first months on the job, Bolton accompanied Trump to Singapore, to meet with North Korean leader Kim Jong-un; Brussels, to meet with NATO leaders; London, to meet with Britain’s leaders; and Helsinki, to meet with Russian President Vladimir Putin. Unsurprisingly, it quickly became clear to Bolton that Trump had no international grand strategy and that his thinking was simply an ‘archipelago of dots’.

In Brussels, Trump managed to aggravate the United States’ most important Western allies, demonstrated a lack of understanding of why NATO existed, and kept his aides on tenterhooks about whether he might actually threaten to withdraw from the alliance.

During the summit with Putin, his aides were even more worried. Things went smoothly until the post-summit press conference, when Trump was asked about Russian interference in US elections. To the horror of his aides, he replied that he had received a ‘strong and powerful denial’ from Putin and did not ‘see any reason why it should be’. The White House had to issue a hasty clarification the next day that in fact Trump had meant the opposite.

Perhaps the most interesting chapters relate to the two summit meetings with Kim, where Bolton’s hawkish views differed most sharply from Trump’s. According to Bolton, at the Singapore summit in 2018, Kim skilfully played to Trump’s ego, ‘confessing’ that he had domestic political hurdles to overcome and highlighting the negative impact of the South Korea – US joint military exercises. To Bolton’s frustration, Trump agreed that the exercises were ‘provocative and a waste of time and money’ and gave them up without receiving any concessions in return.

Alerted by this experience, in preparing for the follow-up summit in Hanoi, Bolton carefully briefed a reluctant Trump on when to exercise the ‘walk away’ option. The book provides a fascinating account of the discussions leading to the impasse.

In criticising his adversaries, Bolton pulls no punches. Treasury Secretary Steve Mnuchin ‘never saw a negotiation where he couldn’t make enough concessions to clinch the deal’, the president’s legal adviser Rudy Giuliani was ‘a hand grenade who’s going to blow everybody up’, and the US ambassador to the EU, Gordon Sondland, who irritated Bolton by overstepping his remit to become involved in Ukraine, ‘apparently didn’t have enough to do dealing with the European Union’. Bolton settles scores with Ivanka Trump and Jared Kushner and many others, but reserves his sharpest criticism for the president, with an entire chapter on ‘Chaos as a way of life’.

In a few instances, Bolton also shows his loyalty. He devotes only slightly over two pages to the killing by Saudi government operatives of the journalist Jamal Khashoggi, and considers Trump’s bland response ‘in hard-nosed geopolitical terms … the only sensible approach’. The reader searches in vain for any reference to the incident as premeditated murder.

Bolton wears his ideology on his sleeve. Whether being called ‘human scum’ by the North Koreans, or being condemned by Russia or Iran, Bolton says that he feels honoured.

The position of national security adviser is second only to that of secretary of state in the US foreign policy establishment, and has been held by such luminaries as McGeorge Bundy, Zbigniew Brzezinski, Henry Kissinger and Brent Scowcroft. Kissinger held the job for nearly six years, and others for three years or longer. The traditions of the position stand in sharp contrast to Trump’s revolving door, making Bolton the third of four advisers during his tenure to date.

Compared with the outstanding memoirs of several of his predecessors, Bolton’s book is detail-oriented and vindictive. Most significantly, it is devoid of strategic vision. The memoir is a stark reminder of just how much damage Trump has inflicted on the US foreign policy establishment.

Robert Wihtol is an adjunct faculty member at the Asian Institute of Management and former Asian Development Bank country director for China and director general for East Asia.