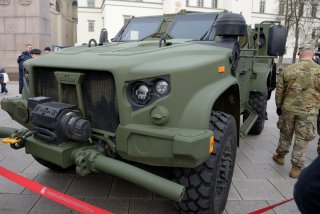 Here's What Need to Remember: The latest FY2021 Department of Defense budget request includes cuts in the rate of the procurement of JLTVs, though the final number in the buy remains the same.

The US Army’s Joint Light Tactical Vehicle looks to be facing a troubled procurement schedule in the upcoming fiscal year. Although greenlit for full-rate production in June 2019, the JLTV saw several upgrades implemented in 2019 to address deficiencies found in service trials. But problems with the JLTV may have resulted in cuts in procurement.

The JLTV is supposed to be the U.S. Marine Corps and U.S. Army’s next generation tactical vehicle, replacing a multitude of MRAPs and up-armored Humvee variants in service as the primary light wheeled transport on the battlefield. The army plans to procure over five hundred thousand JLTVs, and the Marine Corps plans to procure anAs such, it’s armored to protect against a variety of the contract to produce the JLTV was won by Oshkosh Defense, which also is the current manufacturer of the Army’s primary truck, the FMTV A2.

But recent news suggests that Oshkosh is looking to lose on the JLTV. The latest FY2021 Department of Defense budget request includes cuts in the rate of the procurement of JLTVs, though the final number in the buy remains the same. These changes were brought about by the “night court”, the Army’s reshuffling of budget money to free up money for projects they think should be higher priority. The Army also dropped the news that it wants to have another JLTV competition in 2022, to lower cost on further purchases of the JLTV. This doesn’t look good for Oshkosh, as the JLTV program was planned to be its primary military moneymaker in the near future. Another competition would be expensive and force them to drop costs to compete, or risk losing the contract.

However, the larger specter looming over JLTV program is a cut in the overall acquisition number of the JLTV. Defense watchers have speculated that the Marine Corps may cut their JLTV buy as the vehicle may be considered to be too heavy for the Marine Corps’s pivot towards true marine/expeditionary warfare from its counterinsurgency orientation. The Marine Corps already has a light unarmored tactical vehicle in the M1161 Growler. While far lighter than the JLTV, the M1161 is transportable in most common Marine aircraft.

Oshkosh is not afraid of a possible Marine acquisition cut though, with an Oshkosh representative stating that the company believes that the JLTV is perfectly suitable for the Marine Corps’ pivot to expeditionary warfare. But like the Army, the Marines are scaling back their purchases of the JLTV in FY21, by almost half. This could signify that the Marines are indeed looking at other options.

Oshkosh does have a risk mitigation strategy, however. Foreign military sales could pick up the slack in domestic orders of the JLTV. The slowing of JLTV procurement by the U.S. military was long predicted, so Oshkosh has spent the time lining up foreign customers for the vehicle. However, the market for light armored wheeled vehicles is fairly saturated, with a multitude of European, South American, and even African manufacturers competing in the space. Whether the JLTV can succeed in this crowded market when it faces flagging domestic sales has yet to be seen.