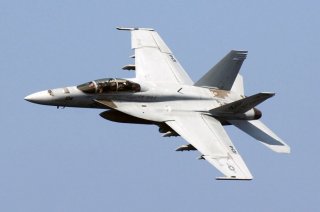 Related: WHY THE NAVY NEVER PUT THE F-22 ON AIRCRAFT CARRIERS

This longer lifespan will make the new Block III Super Hornet a most cost-effective means of delivering air power than ever before, while also offering the Navy itself greater latitude in logistical planning.

Technically not considered a “Block III” improvement, the addition of a centerline tank-mounted infrared search track system (IRST) in the Block III Super Hornet has been called “integral” for the capability of the fighter by Boeing officials.

This passive detection capability is aimed squarely at fifth-generation competitors like Russia’s Sukhoi Su-57 or China’s Chengdu J-20. The IRST can be used to scan the horizon for radar-beating fighters, picking up on the infrared heat released by their jet engines without broadcasting a signal through space to tell others you’re on the hunt. This will give the non-stealth Block III Super Hornet a real fighting chance against stealthy jets, potentially spotting them against the sky backdrop from a hundred miles away.