To Keep the Middle East Nuclear-Free, America Should Build a New Arab Coalition 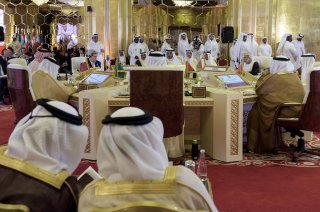 A future with multiple states in the Middle East pointing nukes at one another seems more likely than ever before, but the Israel-UAE deal illuminates a solution. With Saudi Arabia secretly pursuing nuclear technology and Turkey and Egypt pursuing nuclear programs as well, Washington should ponder why states loaded with American weaponry are going nuclear anyway. The short answer is, they think America will, or already has, abandoned the region and chaos will ensue. To prove otherwise, America should organize a new Middle East coalition that provides more security and prosperity to its participants than a nuclear bomb or reactor ever could.

Saudi Crown Prince Muhammad Bin Salman (MBS) wants the bomb, and for reasons beyond Iran with the bomb. He and his father, King Salman, remember that the U.S. abandoned Egypt’s dictator Hosni Mubarak to support democracy protestors. MBS hears vigorous debates in Washington about banning conventional arms sales to Saudi Arabia for his human rights violations. The Saudis know Americans want out of the Middle East just as Russia, China, Turkey, and Iran pursue greater involvement. They wonder whether a close relationship with China and a nuclear arsenal makes more sense than placing their eggs in Washington’s basket.

Turkey’s President Erdogan and Egypt’s President Sisi have the same concerns. It’s no coincidence the Russians are building both Egypt and Turkey their first nuclear reactors and are training hundreds of Turkish and Egyptian nuclear scientists in Russia. It’s ostensibly for civilian nuclear power. In reality, these leaders want a latent nuclear option, and the Russians are happy to sow the seeds of conflict.

The rapprochement between Israel and the UAE suggests a way to put a lid on this nuclear caldron. Most Arab states and Israel want stable governments and strong economies in the region. Now, more Arab states are willing to openly work with Israel, so it’s politically possible to align these once-enemies behind shared goals.

The vehicle could be an American-led security and economic coalition that asks members to uphold three tenants. First, members agree to a defense plan in case another member comes under attack. Second, members cooperate on a regional economic development plan. Third, members that have already signed the Nuclear Nonproliferation Treaty should commit not to leave it and should foreswear nuclear activities that could be used to make nuclear explosive materials.

The coalition can start small with current U.S. non-NATO allies -- Israel, Jordan, Bahrain, Tunisia, Morocco -- plus the UAE. The courting of Egypt and Saudi Arabia would follow. Turkey would be a harder sell. But, if Ankara were convinced the U.S. would not leave the region, and there were economic and security benefits to be had in joining the new coalition, it just might bite. As for Iran, the coalition would create significant additional military and diplomatic leverage for a better deal.

On the security side, coalition members would work with one another to enhance each other’s defense. The U.S. would agree to bring its airpower, artillery, special operators, and intelligence to the table, while regional ground forces lead from the front. The United States has experience with this in its successful fight in 2016-17 against ISIS and in the 1990 Persian Gulf War.

The coalition also could create a military training and education center. As part of that program, the U.S. and other advanced militaries could help Arab members liberalize how they train and promote junior officers, two areas that have crippled Arab militaries. Multi-national training exercises could combine the best aspects of each member’s armed forces.

Coalition members could collaborate on economic development as well. Most of these countries want to improve their education systems, energy sectors, and opportunities for new and growing businesses. To help, the United States and other Western states could use their international credit and investment agencies -- the Development Finance Corporation, the International Finance Corporation, the European Bank of Reconstruction and Development -- to boost Western investment.

The Egyptians could get upfront and long-term funding guarantees for critical infrastructure. Jordanians, who enjoy developed telecommunications and roads but struggle to access financing for their businesses, could receive capital for that. The U.S. would help Saudi Arabia acquire capital to create new industries. For years, the UN has criticized Arab schools’ for focusing on memorization rather than reason and problem solving. America could provide more funding for nonprofit organizations that improve teacher training and curricula.

On the energy side, the U.S. and Europeans could help fund non-nuclear alternatives -- renewables, natural gas, and electrical grid and gas pipeline projects. Washington and other Western capitals could throw their diplomatic weight behind coalition members’ in international energy disputes. This would pique Egypt’s interest, which fears Turkish poaching and interference in their Eastern Mediterranean gas field. Meanwhile, Turkey might benefit from increasing its renewables portfolio.

Ultimately, convincing Middle Eastern and European states to join the proposed coalition will take considerable effort. But it would be worth it. The coalition would give the West more leverage to shape human rights and good governance. It’s also our best chance to deflate the nuclear ambitions of states that otherwise would get the bomb.

This article first appeared in RealClearDefense.