Kel-Tec’s 5.56 RDB: A Blessing And a Curse For Rifle Lovers 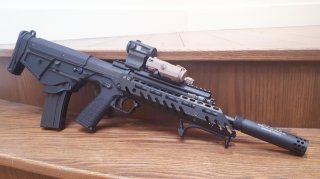 Here's What You Need To Remember: While the RDB isn’t a terrible design, its obsolescent ergonomics, largely mediocre trigger, and limited aftermarket make it a questionable choice.

The Kel-Tec Rifle, Downward-ejecting, Bullpup (RDB) is Kel-Tec’s latest 5.56mm rifle. In a marked change from the earlier SU-16 and RFB, the RDB is a mostly conventional design: an AR-18 style rotating bolt, short-stroke piston-driven rifle. Its sole deviation from convention is its method of ejection—straight downwards—which makes it amenable to being fired from both shoulders. But how does it compare to a regular AR-15 at its price point? Do the bullpup’s features provide a compelling alternative to a premium AR?

The RDB’s primary selling point, downward ejection, is both a blessing and a curse. Despite Kel-Tec describing it as “revolutionary,” similar downward ejecting designs have been used before and proven in battle. The most notable of these are the British Bren light machine gun and American Ithaca 37 shotgun. But both of these designs feature relatively little material around the ejection port on the bottom of the gun. This allows for a user to easily flip the gun over to remedy jams or other feeding difficulties. In contrast, the RDB’s downward ejection chute is significantly more built-up than either of the earlier guns, which may cause problems when trying to remove stuck casings or stovepipes.

Another big selling point of the RDB is it’s “excellent trigger.” While this may have been true compared to bullpups of past generations, the Tavor X95 was released only a year later and features a comparable trigger to the RDB. The famous trigger manufacturer Geiselle even makes the “Super Sabra” trigger pack for the Tavor that improves the trigger to easily surpass the RDB’s.

It’s important to note that the RDB’s “excellent trigger” is only superior relative to other bullpups. While it is marginally better than a stock “milspec” AR-15 trigger, most guns with a conventional layout and even “budget” upgrade triggers will easily surpass the RDB’s trigger in mitigation of creep, reset, and travel.

The rest of the RDB’s features are questionable at best. The mag release behind the pistol grip has proven easy to bump and accidentally drop a mag for users who wear gloves or who have larger hands. The original Tavor featured a similar mag release, and switched to an AR-style push button on the X95 which is faster, easier for AR users to switch over to, and reduces the risk of accidental disengagement.

The bolt catch is also awkwardly positioned in the rear. The contemporary ergonomic trend is to put all controls within easy reach of a hand’s firing grip for maximum speed, as evidenced by the positioning of the bolt catch near the trigger finger on the HK416A5, Radian ADAC lower receivers, M110, M110A1, and B&T APC9K.

So how does the RDB stack up against an AR-15 in its price bracket? The RDB brings a lot of features for its price of around $799 as a prebuilt gun; notably the better-than-stock trigger, adjustable gas system, and piston operation (though whether this is a plus is debatable). But there are properly-built ARs around that price bracket with specifications that potentially are better than the RDB. While restricted to law enforcement only, Geiselle’s “Super Duty LE” rifle features a formidable set of upgrades over a stock AR for only $750.

But one of the key draws of an AR is the extensive aftermarket for parts and upgrades. While for $799 you may get a “good” gun in the RDB, there simply aren’t the parts to take it to an “excellent” gun. One can do with an AR by slowly swapping out triggers, rails, handguards, and other accessories to fit one’s preferences, but there’s practically no aftermarket for the RDB.

While the RDB isn’t a terrible design, its obsolescent ergonomics, largely mediocre trigger, and limited aftermarket make it a questionable choice. It’s a good bullpup rifle, but what does that mean in a world where bullpups are largely being replaced by conventional rifles? France is moving from the FAMAS to the HK416F, New Zealand is moving from an AUG variant to an AR-style rifle, and British’s elite units continue to slowly migrate to ARs despite the adoption of the L85A3.