Khaki and Colt .45s: Head-to-Toe Dress for the Spanish-American War 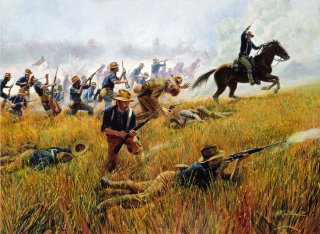 Here’s What You Need to Remember: By the outbreak of the war with Spain, the small U.S. Army was being outfitted with the 1898-pattern khaki uniform blouse. There was still a lack of uniformity in the ranks however, as in just one year there were no less than four patterns of the khaki field service coats being issued.

The introduction of the .30 Caliber Krag-Jorgensen Rifle saw that a new Mills double-looped cartridge belt was adopted; and it held 100 rounds of .30 caliber ammunition. The belt was dark blue and secured with a brass C-shaped heavy wire clasp. A cavalry version was also introduced, and it had twelve additional loops, six over six for the .39 caliber revolver cartridges. The Mills belt was distinctive in that it was made of machine woven web canvas rather than leather—and as a result it proved ideal for the tropical climates of Cuba and the Philippines. The Ordinance Department further supplied the soldiers with a stamped metal canteen, haversack, knapsack and eating utensils.

The situation for the volunteer soldiers was a bit more chaotic, and virtually every type of accoutrement and equipment used by the U.S. Army dating back to 1874 was used. Canteens and knapsacks dating from the Civil War were also dragged from storage to equip the troops.