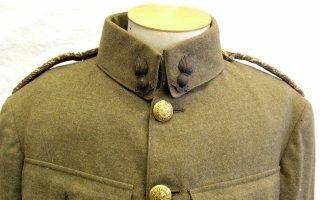 Here's What You Need to Know: Early use of khaki was not limited to the British Army.

Before the development of camouflage that resembled patterns in nature, there was the earliest version: khaki. While known for the casual pants, khaki has a long history as the first widespread military camouflage.

In England, irregular units, including gamekeepers adopted drab colors to hide from game and poachers, and by the Napoleonic Wars British rifle units—including the 95th Rifle Units—were outfitted in green jackets. This was in contrast to the scarlet uniforms of the day.

In fact, the British “red coats” dated back to the New Model Army ordinance and were based on the traditional colors of the Yeoman of the Guard and the Yeomen Warders. While there is a common myth that red coats were favored as they didn’t show blood stains, it is likely pure fiction—notably as blood does show up on red clothing as dark, even black stain. Red had been one part of the color of the Tudor Rose, and the earliest “red coats” were worn with white trousers, while it should also be remembered that the original “Union” flag of the United Kingdom was red and white.

As the British Empire expanded it soon became apparent that “red” or scarlet tunics were not suited for the tropical climate of the Indian subcontinent. Likewise, the heavy wool uniforms were simply too warm. And yet for the better part of seventy years the British Honourable East India Company, as well as regular army troops that served in India, retained their scarlet uniforms.

According to author Stuart Bates, who notes in his book The Wolseley Helmet in Pictures: From Omdurman to El Alamein, Sir Harry Lumsden raised a Corps of Guides in 1848 for frontier service at Peshawar, near the Afghan border in what is now Pakistan. These troops wore a uniform based on their native attire rather than the scarlet tunics. This consisted of a dust colored smock and white pajamas. Originally this uniform was anything but “uniform,” but eventually the fabric was dyed with a mulberry juice giving a yellowish drab color that matched closely the local soil. It was thus named for the color of the soil, using the Persian word, “khaki” for “dust.”

“The term ‘khaki’ means ash-colored and was first used by the British by the British-Indian Army Corps of Guides cavalry regiment in 1849 in order to render the troops less conspicuous in their skirmishes with tribesmen on the North-Western Frontier of India (now Pakistan),” explains British historian Nigel Thomas. “It was adopted by other British-Indian regiments during the Indian Mutiny of 1857 but then abolished, only to reappear in 1868.”

What prompted the British to abandon the color is not fully understood, but one consideration is that—as with the uniforms of the Corps of Guides—the color was not exactly consistent. In fact, over the years numerous attempts were made to formulate a dye that would provide a khaki color that was consistent and wouldn’t fade or run. These attempts failed with the uniforms varying greatly in color after only a few weeks or months of exposure to the weather.

And while khaki made a return in India British soldiers serving in the Zulu War (1879), in the First Anglo-Boer War (1882) and the First Sudan Campaign (1882), retained their scarlet uniforms. However, by the end of the nineteenth-century the “red coat” was duly replaced by khaki.

It should also be noted that it was commonplace for troops to stain their white uniforms and helmets with any appropriate substance in order to break up the white and therefore provide some camouflage. A variety of materials, including mud, tea, coffee, tobacco juice and even curry powder were used.

The problem was “solved” when a fast-dye was patented, which produced a consistent yellowish-brown color that would be retained over a prolonged period.

“During this period it was a grayish color drill fabric but when the British Army adopted it for the Second Boer War of 1899-1902,” explains Thomas. “It had become a light yellowish brown, the color through the two World Wars until the present day for tropical uniforms.”

However, the color did evolve as well, and became darker brown from the tan-colored dust. In 1924 the new shade was formerly introduced and it was slightly greener than the one it replaced.

“The British Army adopted khaki serge for its service uniform in 1902 and for the battledress field uniform 1939-1962,” says Thomas. “Khaki serge was a much heavier fabric than khaki drill and was intended for fighting in winter in north-west Europe. It was a darker greenish brown, the amount of green depending on regimental tradition.

The use of khaki was not limited to the British Army. By the end of the nineteenth-century most of the nations of Europe that had colonies overseas had begun to utilize similar colored “tropical” uniforms. One interesting irony is that in many cases European officers and NCOs were outfitted with their “European” style uniforms, while colonial troops wore the khaki colored ones. Many of these colors were never officially deemed “khaki” but the colors were extremely close in practice.

French Foreign Legion and French Marine Infantry were outfitted with a tan-colored corduroy or “moleskin,” which had a brownish color. During the inter-war period the color was lighted and officially became known as khaki, only to be replaced in the post-war era by the olive drab colored uniforms.

France was not alone in following the British use of khaki, with the Spanish and Portuguese also adopting khaki. The Italians also adopted a similar color in its late grab of colonies in Africa, and through the Second World War. Germany too utilized its own take on khaki, even if they were late to adopt it.

For use in Europe the German army adopted a field gray (“feldgrau”) that proved to be as unsuitable in Africa as the British scarlet had been in India. The Germans thus looked to its own tan-based uniforms.

“As with their colonies, the Germans were late comers to the use of khaki, mainly because they didn’t fight abroad until the 1880s” explains British military historian Chris Dale, who has written on the subject of German colonial uniforms. “The first use of khaki was the Wissmanntruppe in 1889 in East Africa, while in 1891 the Schutztruppe uniform regulations refer to that color as ‘Khaki Brown Drill.’”

While Dale says there are no documents that he has seen that support the theory that the Germans essentially copied the British color, he does believe that this is the most likely scenario. He adds that the use of khaki spread to all German colonies and military outposts, including those in the Pacific, Africa and China, and were further used in the Balkans and Palestine during the First World War.

It was during the First World War when khaki was essentially used on the battlefield by both sides, and in East Africa the British, South Africans, Portuguese and Belgian forces faced off against the Germans all in very similar shades of khaki and in uniforms that had very similar cuts and patterns.

As with the British uniforms, the Germans had many variations on the color and shades, in part because of the complexity of the German colonial administration, and varied branches of services that oversaw the colonies and their respective defense.

“The Germans in South West Africa also used brown corduroy uniforms, not strictly khaki but a shade called ‘Sand Colour’ in the regulations,” says Dale. “In fact the corduroy they used varied from pale khaki to a greyish brown, and it was used from 1889 onwards.”

If the Germans hadn’t copied the British color or patterns, they did rely on British fabric Dale adds, “The first corduroy used by the Germans was made in the cotton factories of Lancashire, U.K.” 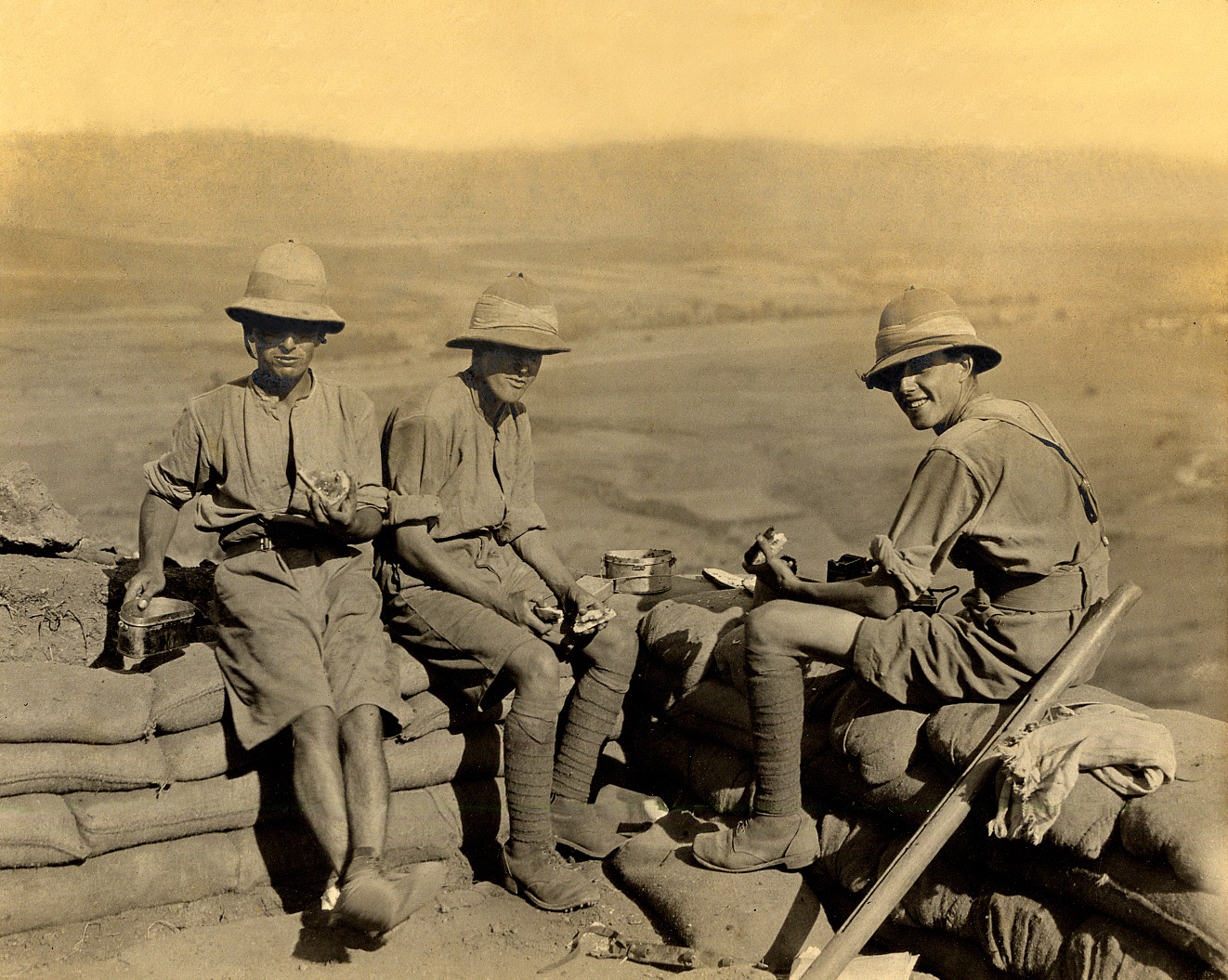 He says that later the Germans made their own corduroy and adds that the German tropical uniforms may have had another use after the war. There is a common theory that the early Nazi-party, the so-called “Brownshirt“ uniforms, were actually an early German military surplus, and that the Nazis reused the Schutztruppe khaki uniforms.

“I’ve never seen any proof of it,” says Dale. “And if they did it would only have been the reams of the cloth, as the cut of the two uniforms was quite different.”

It wasn’t the last time that the German military adopted a khaki colored uniform either, and the Afrika Korps were outfitted in tropical uniforms. Practically as soon it became apparent that the German Army would be involved in the Mediterranean and Middle East, the Tropical Institute of the University of Hamburg was called upon to design a new uniform.

Thomas notes in his book The German Army 1939-45: North Africa & Balkans that these were based on the German colonial uniforms used until November, 1918 and “most items of the M1940 tropical uniform were manufactured in ribbed heavy cotton twill or cotton drill.” He describes the color as being “light-olive.” This evolved into the sandy brown or “tan” M1941 pattern uniforms, which were used not only in North Africa, but throughout the Mediterranean and the Balkans.