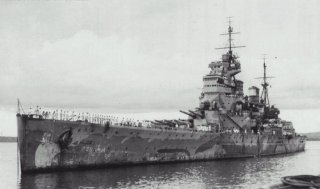 Here's What You Need To Remember: Displacing 44,500 tons (standard) and capable of thirty knots, Vanguard was the largest battleship ever built by the Royal Navy, and was only exceeded internationally by the Iowa and Yamato classes. However, many of its foreign contemporaries carried a heavier main armament.

The above is part of an ongoing National Interest series based on Robert Farley’s recent publication, The Battleship Book. The views expressed are his own. (This first appeared several years ago.)