In the Korean War, America’s F-86 Sabre and Russia’s MiG-15 Fighter Duked it Out 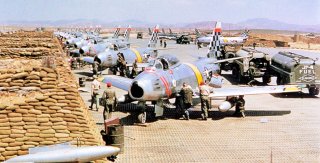 Here's What You Need To Remember: Russian, Chinese and North Korean MiG pilots discovered the Sabre was razor-sharp. It couldn't fly as high, climb as fast or maneuver as agilely as its Soviet-made opponent. But it could dive faster, was more aerodynamically stable, and had a radar gunsight that came in handy during high-speed jet dogfights.

Michael Peck is a contributing writer for TNI. This article first appeared several years ago.