Lasers Could Become the Ultimate Counter to Naval Mines 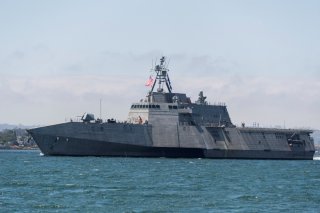 Here's What You Need to Remember: First and foremost, detecting mines more quickly and at further ranges, of course, makes the LCS much more survivable. It will be able to pursue attack, anti-submarine and reconnaissance missions with a much lower risk of mine-attack. Furthermore, identifying the location of mines at greater distances brings the added advantage of enabling lower-risk small boat missions to approach target areas for shore missions, surface attack or recon.

The Navy is looking at ways to improve its now operational airborne laser system designed to track enemy mines from low-flying helicopters and expand the surface area from which mine detection takes place -- and no longer rely purely upon more narrowly configured mechanized or towed mine detection systems.

The system, called Airborne Laser Mine Detection System (ALMDS) enables shallow-water warships such as the Navy's Littoral Combat Ship (LCS) have a much safer sphere of operations as commanders will have much greater advanced warning of mine-cluttered areas.

“We are looking at automating the entire kill chain for MCM (Mine Counter Measures). Now the ALMDS flies on an MH-60. Perhaps we can get that into a smaller form factor and put it on the Fire Scout,” Kevin Knowles, Director of Business Development for LCS, Northrop Grumman, told Warrior Maven in an interview earlier this year.

​Cook explained that the camera or receiver on the helicopter is called a Streak Tube Imaging LIDAR (STIL). The laser is released in a fan pattern, and photons received back are transferred into electrons, creating a camera-like image rendering.

Having this technology operational, it seems, offers a few new strategic nuances. First and foremost, detecting mines more quickly and at further ranges, of course, makes the LCS much more survivable. It will be able to pursue attack, anti-submarine and reconnaissance missions with a much lower risk of mine-attack. Furthermore, identifying the location of mines at greater distances brings the added advantage of enabling lower-risk small boat missions to approach target areas for shore missions, surface attack or recon.

Finally, given that the LCS is engineered for both autonomous and aggregated operations, ALMDS could provide an occasion for the ship to alert other surface and undersea vessels about the location of enemy mines. In fact, Northrop writes that ALMDS provides accurate target geo-location to support follow on neutralization of the detected mines.

“A high-resolution 3-D image of the scene is produced from multiple sequential frames formed by repetitively pulsing the laser in synchrony with the CCD (Charge Coupled Device) frame rate as an airborne platform "push-broom" scans or as a single-axis scanner on a ground-based platform scans the laser fan beam over the scene,” the Arete Associates essay titled “Streak Tube Imaging LIDAR For 3-D Imaging of Terrestrial Targets, writes. “The backscattered light from the objects and the terrain intersecting the fan beam is imaged by a lens.”

The system consists of a Load Handling System (LHS) and destructor, or warhead. The LHS, which is used as an interface between the explosive destructor and common console onboard the helicopter, can carry up to four destructors.

“The destructor is negatively buoyant, has six degrees of motion, can maintain a hover position and can be operated in either automatic or manual mode. The destructor can monitor depth and relative distance from the bottom and has the ability to avoid bottom plowing. The destructor's position is determined by an Integrated Track Point II acoustic tracking system contained in the LHS,” NAVSEA Spokesman Alan Baribeau told Warrior Maven last year - for a previous Warrior report on the system.

The abundance and sheer variety of mine threats can also make detection more challenging. Some so-called “bottom mines” can be buried or shallow-water mines easily triggered by surface ships or submarines. Moored mines, however, often tethered to the ocean floor, can be found in deeper parts of the water column. They can linger below the surface or possibly operate at much greater depths to target deeper draft ships, according to a 2014 NATO essay called “Naval Mines and Countermeasures.”