Lasers Could Ready the F-15 Eagle for 21st Century Warfare 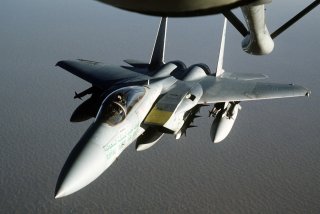 Here's What You Need to Remember: It's not just the United States with a horse in the laser weapons race — in addition to similar Russian and Chinese projects, Germany too has recently broken ground on their own domestically developed naval laser weapon. Call it the democratization of technology.

The United States Air Force Lifecycle Management Center just awarded Raytheon Technologies a $15.5 million contract to “build and deliver an upgraded version of its high-energy laser weapon system, or HELWS,” according to a Raytheon statement.

Furthermore, the “AFLCMC will test the system in order to define requirements for future production programs, focusing on the air defense of air bases against unmanned aerial vehicles.”

A Raytheon spokesperson stated that thanks to the company’s extensive laser weapon development experience, they are ready to “build another, more robust laser system for the Air Force’s premier organization and take a key step toward defining an air base air defense program of record.”

Raytheon has already been awarded two development contracts by the Air Force for developing their HELWS prototype, valued at $23.8 million and $13.1 million respectively. The HELWS system is essentially a directed energy system, i.e. a laser weapon that concentrates its beam on various targets in order to destroy them by rapidly heating and destroying their electronic components.

Previous HELWS prototypes have been mounted to dune buggy-like vehicles and have presumably been tested statically, as their intended role would be to provide air defense protection for air force bases as a solution to smaller-sized drone threats. This latest air force contract stipulates that the newest HELWS prototypes should be palletized in order to simplify logistics.

The Air Force is not the only branch with laser weapons in the research and development pipeline. Parallel to the Air Force, some U.S. Navy Arleigh Burke-class destroyers have already been outfitted with laser weapons during combat deployments and have been tested in near-real world conditions.

Another Air Force laser weapon project, SHiELD, would see fighters like the F-15 armed with laser pods. The Navy’s laser program appears to be more mature than the Air Force’s project and has resulted in higher-output laser weapons, at least until this point in time. This may be in part due to the design challenges inherent in building and designing a fighter jet-mounted laser weapon compared to on a ship. Physical space on a ship is naturally more abundant than on a fighter jet, and a ship has a much greater electricity generation potential, making the Navy’s laser project easier to achieve.

And it's not just the United States with a horse in the laser weapons race — in addition to similar Russian and Chinese projects, Germany too has recently broken ground on their own domestically developed naval laser weapon. Call it the democratization of technology.

Caleb Larson is a defense writer based in Europe. He holds a Master of Public Policy and covers U.S. and Russian security, European defense issues, and German politics and culture. This article is being republished due to reader interest.