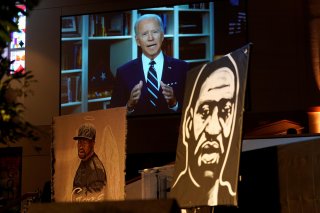 Former Virginia Gov. Terry McAuliffe said during a video conference Saturday that Democrats believe former Vice President Joe Biden is “fine in the basement” and has the best bet of winning the election if he makes small but strategic statements.

Fox News obtained a video Tuesday of McAuliffe making the admission during a conference with the “monthly breakfast” of the Norfolk City Democratic Committee. The Biden surrogate made the comments after the former vice president was criticized for suggesting in a May 27 interview that black people who support President Donald Trump “ain’t black.”

“People say all the time, ‘Oh, we got to get the vice president out of the basement,'” McAuliffe said during the conference. “He’s fine in the basement. Two people see him a day — his two body people. That’s it. Let Trump keep doing what Trump’s doing.”

Biden needs to come out strategically, according to the former Virginia governor.

“And when he says something like he did on race relations two days ago, it needs to have a big impact — thoughtful, and that’s what we’re preferring that he actually do at the time.”

Trump, for his part, often mocks Biden for sheltering in his basement during the coronavirus pandemic, which has reportedly killed nearly 110,000 people in the United States.

“I’d love to see him get out of the basement so he can speak,” the president said in a telephone interview with Fox News in May.

Still, Biden’s polling better than Trump amid the pandemic and protests against the death of George Floyd, a black man who died after a police officer knelt on his neck for several minutes, per a video of the incident.

In a CNN poll published Monday, 55% of people surveyed said they would vote for Biden, while 41% said the same for Trump, who shocked pollsters after he defeated Clinton in a close presidential election in 2016.

Biden’s campaign did not immediately respond to the Daily Caller News Foundation’s request for comment.