Liberals Have Faced a Conservative Supreme Court Before 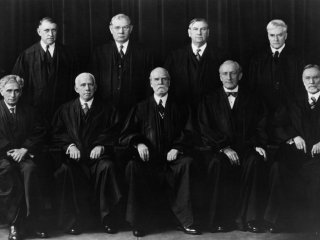 With control of the White House and both houses of Congress, Democrats are looking to make major changes in government initiatives – including on climate change, immigration and education.

But many of those ideas may end up in court – where they will face a Supreme Court dominated by conservatives.

Donald Trump’s appointments of Justices Neil Gorsuch, Brett Kavanaugh and Amy Coney Barrett make the Supreme Court more conservative than it has been at any time since the 1930s, when Franklin Delano Roosevelt was president. Many court watchers expect that the current court’s decisions will lean much further to the right than Congress, the president and public opinion do.

Fearing a clash between the branches, some have even suggested that President Joe Biden consider adding justices to the court – as Roosevelt considered but ultimately decided against – to prevent key legislation from being struck down.

As scholars of U.S. legal history know, the court is often less insulated from politics than many people assume. Roosevelt’s threat to pack the courts, and what happened next, illustrate the pressures the Supreme Court faces to limit how far it strays from the other branches and from public opinion.

Most Americans today are not accustomed to a right-leaning Supreme Court. Instead, they have viewed the judicial branch as a reliable – or lamentable – champion of liberal values. That dates back to the 1950s and 1960s, when the court, led by Chief Justice Earl Warren, made a series of landmark liberal rulings generally expanding civil rights on issues from school desegregation to criminal defendants’ rights.

But the liberalism of the Warren court was itself a major shift.

From the late 19th century through to the 1930s, federal courts, including the Supreme Court, were generally considered to be the most conservative branch of the federal government, especially on economic issues. The courts championed limited government and broad freedom for corporations.

That period of pro-business jurisprudence came to be known among legal scholars as the “Lochner era,” named for the 1905 case of Lochner v. New York.

In that case, the Supreme Court struck down a New York law that, to protect employees, had regulated working conditions in bakeries. The majority of the justices held that the law violated bakeshop owners’ liberty to contract with their employees as they wished.

The court also continued to limit Congress’ power to regulate interstate commerce to a narrow range of economic activity that excluded most manufacturing and services.

The New Deal and the court

In 1933, Roosevelt came to power with a strong mandate to tackle the Great Depression. He quickly established several new government agencies, reformed financial regulations and sought to regulate business in unprecedented ways.

The National Industrial Recovery Act, for instance, called for industrywide codes of fair competition that set minimum wages, prices, maximum working hours, production quotas and regulations for the process of selling goods. Although Congress saw the need for such a transformative piece of legislation, it was challenged in the courts by a poultry company that had been charged with violating a new code governing the poultry industry. Schechter Poultry’s violations included selling chickens on an individual basis and selling them to nonlicensed purchasers. The right-wing majority on the Supreme Court ruled in favor of Schechter and struck down key parts of the NIRA, drawing in part on its restrictive understanding of the commerce clause.

In this and other cases during Roosevelt’s first term, the Supreme Court demonstrated a growing divergence from the other branches and public opinion. The public had expressed its hunger for strong and far-reaching economic legislation by electing New Deal Democrats to Congress and the presidency. But unelected lifetime appointees on the court held onto a more conservative understanding of the scope of governmental power.

When Roosevelt was reelected in a landslide in 1936, he proposed a bill to reform the federal judiciary in an attempt to stop the Supreme Court’s obstruction of his policy initiatives.

This bill included what became known as his “court-packing plan,” which would have potentially allowed Roosevelt to appoint six more justices, tilting the majority in his favor.

The Constitution doesn’t prohibit expanding the court, but even Roosevelt’s supporters were wary, so the eventual bill was passed without that provision.

As the bill was being debated in Congress, court-packing became less urgent to Roosevelt and his supporters because a change occurred within the Supreme Court itself. Nobody died, but someone switched sides. Associate Justice Owen Roberts had previously voted with the right-wing opponents to the New Deal, but in 1937 he joined the more liberal justices to uphold a minimum-wage law in the state of Washington.

From that point on, the court expanded its interpretation of the commerce clause to give Congress much broader powers to regulate the economy.

Some commentators claim that Justice Owen Roberts shifted his opinion in direct response to Roosevelt’s threat to pack the Supreme Court, seeking to avoid executive and congressional interference in the judicial branch and therefore preserve its apparent independence.

But Owen Roberts actually had decided his position in that case before Roosevelt publicly proposed the judicial reform bill.

Perhaps Owen Roberts already suspected that a court-packing plan, or something like it, was on the horizon when he decided to shift his position. But he might have been sufficiently concerned about the court’s departure from public opinion and the other branches even without such a threat.

When the court diverges drastically from the political mainstream, the public views it as less legitimate. That is an outcome Supreme Court justices are usually eager to avoid.

There are perhaps more differences than similarities between Roosevelt’s confrontation with the court and the relationship between the Biden administration and the court today. For one thing, this court has not had a decadeslong rightward slant. Biden’s record is also as a centrist, and with a narrow majority in the Senate and a divided American public, he may not seek as transformative an agenda as Roosevelt did.

But the lesson from the 1930s remains: It is difficult for the Supreme Court to sustain a drastic divergence from other branches or public opinion without its legitimacy coming into question. To maintain the reputation of the institution, Supreme Court justices often limit their own divergence from the political mainstream, whether or not the other branches explicitly threaten to interfere.