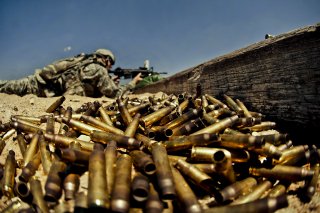 Here's What You Need To Remember: These bullets go in a variety of guns.

Since their invention in the tenth century, engineers, soldiers, and tinkerers have constantly tried to make firearms more deadly. Typically that involves moving to heavier bullets driven by more powerful gunpowders, and while that is effective it is also louder, generates more recoil and necessitates new firearms. One solution is the creation of newer, deadlier ammunition for existing guns.

A normal 9mm firearm will typically have a maximum chamber pressure of 35,000 pounds per square inch (psi). By using stronger, more powerful gunpowders +P ammunition increase chamber pressure for a 9mm firearm to up to 38,500 psi—a 10 percent increase. This increases the bullet’s velocity and the ability to incapacitate the target. The downside is that not all firearms are engineered to withstand repeated use of very high-pressure ammunition, and +P ammunition can lead to increased wear and tear.