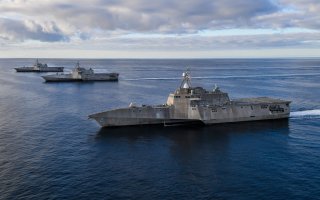 Here's What You Need to Know: The Navy continues to make progress wiring its surface fleet for networked maritime warfare operations.

A Navy Littoral Combat Ship is conducting coastal patrols for reconnaissance and countermine missions when it suddenly comes upon or discovers an approaching fleet of enemy ships. How many of them are there? How far away are they? What weapons might they be armed with? All of these questions, potentially answered by drones, surveillance planes, or even space-based nodes, would need to be cataloged, stored, and transmitted quickly to larger, more heavily armed surface vessels such as carrier strike groups, fixed-wing aircraft, ground-based command and control, and other data systems able to perform data analysis and connect maritime warfare “nodes” to one another.

Surface ships such as the Littoral Combat Ship (LCS), rely upon a host of interwoven technologies intended to share key data in real-time—such as threat and targeting information, radar signal processing and fire control systems, systems which would need to share data in real-time to optimize combat performance.

This is why the Navy continues to make progress wiring its surface fleet for massive “interconnected” or networked maritime warfare operations by arming carriers, amphibious vessels, destroyers, and even submarines with an emerging ship-based combat communication system called CANES.

CANES, or Consolidated Afloat Networks and Enterprise Services, is a radio and computer command and control system that is increasingly being cyber hardened and operated with greater levels of AI-enabled automation. The Navy has both been integrating and upgrading CANES across its surface fleet to cyber-harden its networks, migrate toward AI-enabled computing and add new levels of automation to streamline functionality. CANES gathers and transmits intelligence across domains and through both classified and unclassified networks. The faster and more efficiently data can be analyzed, stored, and shared, the more time Navy commanders may have to respond to a fast-evolving threat dynamic such as the aforementioned LCS scenario.

The LCS, in particular, draws upon interconnected surface and anti-submarine “mission packages” to integrate anti-submarine warfare, countermine operations, and surface warfare technical systems woven together with the ship’s technical infrastructure. Among other things, the mission packages include ship-mounted guns and missiles along with helicopters, drones such as the Fire Scout, and various sonar systems—the kinds of things potentially enhanced by CANES consolidation of networked nodes potentially strengthened by AI-empowered analysis.