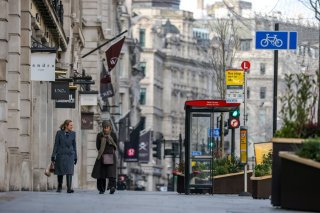 As the UK reports its worst excess deaths since the second world war and the NHS is stretched to breaking point, critics of lockdowns have largely gone quiet. Despite this, previous experience shows that we’re never far from an anti-lockdown backbench rebellion, mainstream opinion piece, open letter or polemic on the Lockdown Sceptics website.

Those behind such criticism have cited various studies claiming that the economic costs of lockdowns far outweigh the health benefits. However, there are some deep flaws in these analyses. They wrongly assume that economic losses can be attributed solely to lockdowns. And some use an inappropriate way of calculating the economic value of good health to make their comparisons.

Evidence suggests that GDP losses would occur during the pandemic regardless of government interventions. For example, the International Monetary Fund used changes in travel, electricity use and unemployment insurance claims at the start of 2020 to show economic conditions deteriorated before government restrictions were introduced and began to recover before they were lifted. It concluded that lockdowns and voluntary social distancing had a near-identical economic impact.

Another cross-country study, which found government responses to the pandemic have had a strong bearing on national economic performance, showed exposure to the overall global economy had an impact too. In some cases, reductions in global trade and tourism actually had a greater impact on a country’s GDP than its government’s response.

And a preprint study (a piece of research yet to be reviewed by other scientists) found that consumer spending in Denmark and Sweden fell by similar amounts during the first wave, even though Denmark introduced a stringent lockdown and Sweden mostly voluntary restrictions. This implies that most of the economic damage experienced was due to the pandemic rather than the response.

When surveyed in November 2020, a majority of UK economic experts also said that they thought the UK’s lockdown had caused limited economic damage beyond what would have been felt if there had been no response to the pandemic.

Even when researchers have acknowledged that the pandemic itself likely caused some GDP loss, they’ve then gone on to ignore this subtlety in most of their calculations and overemphasise the economic damage caused by lockdowns. But most analyses don’t even acknowledge that the pandemic on its own might have had an economic effect.

Not using the right measurements

The second flaw with these analyses is how they measure health benefits. They use units called quality-adjusted life years (QALYs), but there are problems with how these are estimated and valued.

QALYs are used in the NHS to show whether treatments offer good value. If an intervention lets someone live for an additional year in perfect health, it provides one QALY. If it lets someone live longer but with imperfect health (for instance with a chronic condition or disability), then each additional year it gives them equals a fraction of a QALY.

When assessing cost-effectiveness, the health service values a QALY at between £20,000 and £30,000. Giving someone an additional year of high-quality life for this amount or less is deemed good value. But the cost-benefit analyses show that safeguarding people’s health using lockdowns costs much more. By one estimate, every QALY protected has cost the UK at least £220,000 in lost GDP.

But the more serious flaw is that the £20,000-£30,000 threshold is only relevant to allocating the NHS budget. From a wider societal perspective, the value of a QALY is open for debate – and according to one study could be up to £70,000.

Plus, there’s no evidence – ethical, economic or medical – that confirms that £20,000-£30,000 is the correct threshold for the NHS to use. The figure is founded on historical convention. Research suggests the true threshold could be as low as £12,936, while conversely the Cancer Drugs Fund – established by the NHS to allow patients to access drugs that aren’t usually deemed cost-effective – implicitly values QALYs at up to £220,000.

Some authors of cost-benefit analyses have stressed that their work is exploratory and shouldn’t inform policy, but such subtleties are often lost on other commentators. While it’s important to continually question and assess our response to this pandemic, citing flawed research and ignoring the finer details is a dangerous path to take. Future research needs to take these subtleties into account.