London's Gun: Why No One Except The British Army Likes The L85A1 Assault Rifle 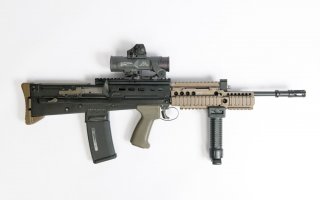 Here's What You Need To Remember: The L85A3 of today is an accurate and reliable weapon, but it took the UK government too long to correct the problems. Over the years the British Army has spent a total of $461 per rifle to make the weapon reliable, which is almost enough to completely replace the rifles with M4 carbines.

In the mid-1980s, the United Kingdom became the first major NATO power to adopt a so-called “bullpup” assault rifle. The L85A1 Individual Weapon was unique in that it placed the rifle’s operating system and magazine well behind the trigger. The result was a weapon as short as a submachine gun with the performance of an assault rifle. The adoption of the L85A1 was a watershed moment in the history of small arms marred by the rifle’s poor performance in the field.

Kyle Mizokami is a defense and national-security writer based in San Francisco who has appeared in the Diplomat, Foreign Policy, War is Boring and the Daily Beast. In 2009 he cofounded the defense and security blog Japan Security Watch. You can follow him on Twitter: @KyleMizokami. This first appeared in October 2018.