Look Closely: This Picture Holds the Key to China's Dominance in the South China Sea 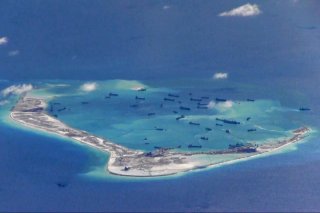 Key Point: A permanent presence on the ground would solidify China’s hold on the South China Sea.

According to the Asia Maritime Transparency Initiative, Beijing has created more than 3,200 acres of new land. China initially claimed its “territory” was being developed for peaceful purposes, from aid to mariners to scientific research, yet many of the islands now feature military-length airfields, antiaircraft and antimissile guns, and naval guns. Cuarteron Reef now has a new High Frequency early-warning radar facility for detecting incoming aircraft, a development difficult to square with a peaceful mission. Farther north, but still in disputed territory, China has installed HQ-9 long-range surface-to-air missiles on Woody Island.

Kyle Mizokami is a defense and national-security writer based in San Francisco who has appeared in the Diplomat, Foreign Policy, War is Boring and the Daily Beast. In 2009, he cofounded the defense and security blog Japan Security Watch. You can follow him on Twitter: @KyleMizokami. This article first appeared in 2017 and is reprinted here due to reader's interest.