Looking for a Bolt-Action Rifle? Check Out Mossberg's Patriot Predator 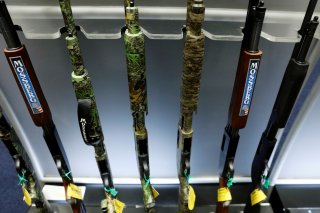 Here's What You Need to Remember: The Bushmaster model of the Patriot Predator takes some slight steps away from its smaller calibered cohorts. Whereas the Winchesters and the Creedmore will give you a 5+1 capacity, this big beast takes the ammo load to 4+1.

Mossberg has brought another player to the game with one of its best bolt-action rifle models, the Patriot Predator .450 Bushmaster.

Now offered in four calibers, the .243 and .308 Winchesters, a 6.5 Creedmoor, and the all-new .450 Bushmaster. I was lucky enough to get my hands on the Bushmaster and thoroughly enjoyed taking a good look at this great rifle.

Let’s start with the across-the-board details. The Mossberg Patriot Predator is a 6.5-pound synthetic rifle with an adjustable trigger, a matte blued barrel, sporting a top Picatinny rail for your scope mounting. The Predator has a fixed 13.75 length of pull. The comfortable and easy-to-use bolt handle is generously sized. I found the operation of my Bushmaster’s to be smooth without catches.

All of the Patriot Predators can be purchased with the standard color combo, the blued barrel with a brown stock, which is officially “Flat Dark Earth”. Mossberg also offers some Patriot Predator rifles with a Cerakote brown barrel and camouflaged stock if looks are your thing. The Bushmaster is only available in standard colors.

The Bushmaster model of the Patriot Predator takes some slight steps away from its smaller calibered cohorts. Whereas the Winchesters and the Creedmore will give you a 5+1 capacity, this big beast takes the ammo load to 4+1. Trust me, the increase in amazing stopping power more than makes up for one less shot on target. Another obvious difference is the barrel of the Bushmaster. With a 16.25” barrel, the Bushmaster is 4” shorter than the other Predator rifles. The overall length is also much shorter at 35.5” instead of 42.25”. Something to consider if you’re safely housing your rifle in a gun safe.

Since this is a more compact model, that can be used in many ways, Mossberg has deviated from the originals in another important way by including adjustable rifle sights on the .450 Bushmaster. Not requiring additional optics being mounted to the Predator for accuracy is a great way to provide a universal purpose. The Bushmaster model of the Patriot Predator would be much better suited to any home defense scenario.

Considering how affordable the Mossberg Patriot Predator is, I easily see this being a bolt-action that appeals to pretty much anyone looking for a good rifle. The Mossberg Patriot Predator .450 Bushmaster costs only $514, and if you really are trying to hold the purse strings tight, you can pick up the original calibered options for less than I pay for premium leather holsters. Since I like the added functionality and the wicked caliber of the Bushmaster, I was happy to fork over the extra cash.

All in all, no matter which caliber you are looking for, the very affordable Mossberg Patriot Predator is an excellent choice for your next bolt-action rifle. I’m impressed with the evolution of the .450 Bushmaster, and it is an impressive addition to the Mossberg lineup.