Looking For a Striker-Fired Pistol? Here Are the Seven Most Reliable 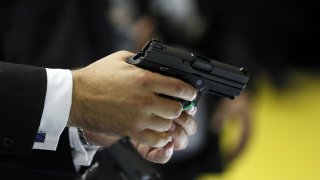 If you’re looking for a pistol that you can use for personal protection, self-defense, and concealed carry, you’ve come to the right place. 9mm striker fired pistols as a whole are the simplest and most reliable handguns that you can own, assuming that you’re going to buy from a reputable manufacturer.

Note – for the purposes of this article, we’ll be sticking with mid-sized and full-sized 9mm handguns rather than guns of other calibers and sizes. Also note that this article is aimed at beginners who have little to no knowledge of firearms and are looking to make a first purchase.

Here are the best striker fired pistols on the market today:

The CZ P10C is CZ’s first striker fired pistol. The company had previously been most well known for making the CZ75 series of hammer fired pistols. The P10C was released in 2017 (after its initial development had began in 2014) and is designed to

The P10C comes with a fiber reinforced polymer frame along with a stainless steel side. It competes directly with the Glock 19. It was even built by CZ to fit the same holsters as the Glock as well. Since Glock has a massive array of aftermarket support and parts, this is a major plus.

Full size and compact variations of the P10C are also available.

The Glock 17 and 19 are the pistols that started the whole striker fired pistol craze in the first place. The G17 was released in 1983 and the G19 followed a few years later. The G17 is a full size handgun with a 17 round capacity while the G19 has a 15 round capacity and is more compact for concealment.

The main benefit to the Glock series of pistols are their inherent reliability, simplicity, and their massive array of aftermarket parts and support. In fact, the Glock pistol is one of the single most customizable firearms on the planet, rivaled only by the AR-15 and the 1911 pistol.

The HK VP9, also known as the SFP9, was released in 2014. The pistol was designed directly to compete with the Glock 19 and the Walther PPQ, but particularly the latter people as HK sought to make a pistol that would have a very similar trigger and ergonomics to the Walther.

The VP9 is more close in size to the G17, but has a smaller magazine capacity of 15 rounds. It comes with two polymer protrusions on the rear of the slide that make it easier to grasp with a wet hand. It also offers interchangeable backstraps and side panels on the grip to accommodate different

The P320 was adopted into the United States military as the M17 or M18. The M17 is a larger version with a longer slide, while the M18 is a smaller compact option. The M17 is being issued to the Army and the M18 issued to the Air Force and Marine Corps. Both pistols come with a manual safety, which the standard P320 does not.

The Smith & Wesson M&P line was released in 2005 to succeed their 3rd generation hammer fired guns. The M&P line has since grown tremendously to become Glock’s main competitor. The M&P 2.0 series was released a few years ago, and features enhanced ergonomics with more aggressive grip stippling as well as a superior trigger.

The Walther P99 (as well as the P99 Compact) is truly one of the most unique striker fired pistols ever made. This is because it’s a double action single action and does not have a consistent trigger pull as the other options on this list. Unveiled in 1996, the P99 has a double action pull for the first shot with all subsequent pulls single action. Meanwhile, a decocker lever on the side puts the weapon back into double action.

But the pistol can also be placed into AS mode by tackling the slide back slightly on double action. This AS mode essentially makes the double action a much lighter pull and therefore significantly easier to shoot, but also safer to carry than the single action.

The Walther PPQ is a developed Walther P99 that has a more Glock-like single action only trigger with a consistent pull. It also features enhanced ergonomics over the P99 with more aggressive grip texturing, a squared off trigger guard, and forward slide serrations that make it much easier to perform a brass check on the weapon.

There are two primary versions of the PPQ: the M1 and the M2. The M1 has a European style paddle magazine release and the M2 has an American style push button magazine release. There are also longer barreled options for both pistols if you desire a longer sight radius and increased bullet velocity. All in all, the PPQ is a very underrated pistol.

Each of the above striker fired pistols that we have covered are truly excellent choices for self-defense or personal protection, and you can’t go wrong with any of them.