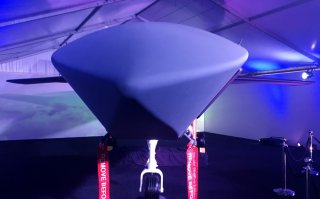 Here's What You Need to Remember: For any mission, an ATS could take off from many more possible places than airbases. In a likely deployment mode, the aircraft, pulled from storage as war approached, would be dispersed by road, carried in shipping containers by semi-trailer trucks.

If there’s a definition of the ‘loyal wingman’ concept, it’s this: a cheap, pilotless aircraft with enough flight performance to accompany fighters and the intelligence needed to semi-autonomously support them.

Some of those functions will be exercised by these attritable jet drones when flying alone, without supervisory crews in accompanying fighters or surveillance aircraft.

This article is specifically about potential applications of the Boeing Airpower Teaming System, a loyal wingman that’s under development and testing in Australia for the global market. The focus is on what might be generalised as electromagnetic missions. In the absence of detailed information from Boeing, the discussion builds on my assessment of the design in an earlier article.

The Kratos XQ-58 Valkyrie and Spirit Mosquito—developmental and demonstration aircraft for the US and UK air forces, respectively—have similar potential. But it’s the ATS that’s likely to go into service with the Royal Australian Air Force if the loyal wingman concept proves sound.

Let’s start by looking at problems with the concept. One is that it’s not clear that fighter pilots in action have time to manage semi-autonomous helpers. Directing them from aircraft overseeing a battle, such as Boeing E-7 Wedgetails, may be more practicable—but also less useful.

Loyal wingmen will not be able to accelerate away from a threat with anything like the speed of fighters, so they will be vulnerable at greater ranges than fighters are. If their mission is to go close to an enemy so fighters need not, they could be in great danger. Stealth could help, however.

Each of the several functions discussed below requires a sensor system that must be developed and integrated with the rest of the airframe. That implies expense, time and risk of failure. Tactics would also have to be created.

Nonetheless, loyal wingmen have great potential. They may bring three main characteristics to an air campaign: mass, adaptability in function, and survivability through dispersal.

Mass comes from low prices: an air force can have far more loyal wingmen than fighters. Boeing isn’t quoting an ATS price, but it gives the useful hint that some payloads could cost more than the unequipped aircraft. The most expensive would have to be radar, which is unlikely to cost more than US$5 million (A$7 million), so the unequipped aircraft should be cheaper than that.

To that cost, add the payload and ground equipment.

Operation should be extremely cheap, above all because such aircraft will usually be kept in storage, like missiles.

Being numerous, loyal wingmen can complicate the task of an enemy trying to control airspace, stressing its limited force of fighters carrying a limited number of air-to-air missiles.

Loyal wingmen should be able to operate somewhat independently, as drones generally can. They will be able to maintain a presence in more numerous locations than can be covered by precious fighters. The enemy may be hard pressed to counter their presence in all locations.

An air force might, for example, send an ATS to do a passive radio-frequency reconnaissance sweep that would otherwise have demanded a fighter. The ATS would deploy with only the sensor needed for that mission, whereas a fighter would have flown out as a costly package of mostly surplus capabilities.

That brings us to the adaptability of the ATS concept, based on fitting modular noses with different equipment. A passive radio receiver for detecting and localising enemy emitters would indeed be a common choice—though a cheap sensor of that type may be too imprecise to support fighters in battle.

In principle, several ATSs working together could effectively form a single passive array, inexpensively achieving the precision that would otherwise require a single set of high-grade equipment in a manned aircraft. Making that work might not be easy, however.

The passive-radio capability could be used in long-duration surveillance, with ATSs shuttling to and from mission stations to supplement, say, Wedgetails or P-8 Poseidon maritime patrollers. With their low cost, ATSs could be sent closer to the threat than the costly manned aircraft could be—and, thanks to their speed, closer than traditional surveillance drones, which in general are neither survivable nor cheap.

Even if they provided only approximate passive radio detection, ATSs might cue the precise sensors of large, crewed aircraft.

A more expensive ATS sensor could be radar. Boeing has said the aircraft will provide its payload with cooling, which most radars need. Here the potential missions are almost as varied as the applications of airborne radar, but one stands out: radiating to observe targets while friendly fighters keep their radars off and therefore undetected.

Note, however, that an ATS with a radar, or indeed an elaborate passive system, would hardly be attritable.

ATS noses could be fitted with jamming and spoofing equipment, also using the cooling function. Lacking an onboard operator, an ATS couldn’t perform the mission of a Boeing EA-18G Growler electromagnetic attack aircraft, but it could be an interesting substitute for a slow and vulnerable standoff jammer: it could use its greater survivability to take its radio-energy transmitter closer to enemy radars or communications gear.

For surveillance or reconnaissance, noses could be fitted with optical sensors, whether working in the visual or infrared bands.

An ATS could carry a transponder, becoming a communications node in places where long-endurance drones couldn’t be sent safely. Aircraft, ships or land forces out of sight of each other could pass messages via the ATS.

Conceivably, loyal wingmen mimicking the signals of friendly fighters could be sent towards enemy fighters to make them expend missiles or retreat. Such drone activity would at least confuse enemy pilots and disrupt their tactics.

Because noses can be swapped between ATSs, any need to service or fix an aircraft between flights might not prevent its next mission from going ahead at short notice.

For any mission, an ATS could take off from many more possible places than airbases. In a likely deployment mode, the aircraft, pulled from storage as war approached, would be dispersed by road, carried in shipping containers by semi-trailer trucks.

One container looks like another, so an air force could buy thousands of them as decoys for a few thousand dollars each.

Conceivably, an ATS’s container would also hold fuel. Probably less than 1,500 litres per flight would be needed.

While we wait for Boeing to reveal the specific operating mode, we can imagine an ATS crew in a truck driving to a straight stretch of road and pulling out the aircraft, perhaps using a crane integral with the container. The crew would mount the wing on the fuselage, fuel the aircraft and press the ‘execute’ button on a ground console, which might be just a laptop.

After the mission, the ATS could return to a different location to which the crew had shifted or at which another crew was waiting, the object being not to establish anything like a base that an enemy could attack.

Northern Australia notably has thousands of kilometres of straight, flat roads. On the other hand, much of the territory lacks foliage under which a crew and truck could hide from satellite sensors.

Eventually, survivability of crews and ATSs could be enhanced by an air force deploying autonomous trucks that hauled around empty containers to confuse the enemy.

As a campaign progressed, an operator might find that it still had plenty of ATSs and trucks shuffling around its territory while most of its manned fighters had been shot down or reduced to junk by airfield attacks.

If the other side were suffering similarly, the drones might eventually be just about all that was left. That consideration increases the importance of potential kinetic functions for loyal wingmen, but that’s a discussion for another time.

This article was originally published by the Australian Strategic Policy Institute.