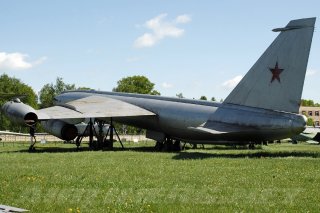 Here's What You Need To Remember: Before the advent of ICBMs, nuclear bombs and missiles would be delivered by supersonic planes. As missile technology developed, plans for these planes fell by the wayside - including the American P6M SeaMaster and the Soviet M-70.

With airline passengers crammed like sardines, it’s hard to remember there was a time when airliners were more like ocean liners. In the 1930s, seaplanes were queens of the sky. Clipper seaplanes like the Boeing 314 were the 747s of the era, carrying passengers on long flights across the Atlantic and Pacific.

Today seaplanes seem an anachronism—cute flying machines that haul tourists in remote places like Alaska. But for a period during the early Cold War, those floating flying machines would have been dropping nuclear bombs over America and Russia.

Seaplanes have always had a military dimension. In World Wars I and II, cruisers and battleships carried them for scouting and to spot the fall of the ship’s gunfire. Long-range floatplanes like Japan’s Kawanishi H8K could fly 4,500 miles across the Pacific. Before there were search-and-rescue helicopters, the sight that downed Allied pilots or shipwrecked sailors most longed to see was the beloved PBY Catalina taxiing across the water to rescue them. If no airfield could be found in the vast expanses of the Pacific, then a seaplane tender could always anchor at some little island and function as a floating airbase for a flock of floatplanes.

But after 1945, the military seaplane, with its cumbersome floats (the Catalina was nicknamed the “Dumbo”) began to be replaced by long-range jet aircraft as well as helicopters. Nonetheless, both superpowers pursued amphibious strategic bombers.

The United States had its Martin P6M SeaMaster, a subsonic strategic bomber with a speed of almost seven hundred miles per hour and a range of 750 miles. Several aircraft had been built, and the SeaMaster was within a few months of deployment, when the program was canceled in 1959.

Not to be outdone, the Soviets conceived their own project in 1955. The Myasishchev M-70 would not just have been an amphibious nuclear-armed bomber: it would have been supersonic as well. Authors Yefim Gordon and Sergey Komissarov, in Unflown Wings: Soviet/Russian Unreleased Aircraft Projects 1925-2010, the authoritative tome of Soviet aircraft that never left the drawing board, state the M-70’s mission would have been to:

perform cruise missile attacks or conventional bomb strikes on enemy shipping, reconnoiter targets for Soviet submarines (with which it could also rendezvous when operating far from the shore), refuel from a submarine, find its target at altitudes close to the service ceiling when in very hostile airspace and launch a cruise missile at supersonic speeds in any weather, day or night, throughout its altitude envelope.

When the Myasishchev design bureau said its seaplane-bomber was high-flying, it wasn’t joking. One version of the M-70 would have launched cruise missiles from seventy thousand feet, another variant from fifty-five thousand feet. Speed would have been between 1,100 to 1,500 miles per hour (between Mach 1 and 2), with a range of almost five thousand miles. This would have been in line with 1950s bomber design, which emphasized high-altitude and high-speed attack to escape interception, until the advent of surface-to-air missiles in the 1960s encouraged low-level attack.

The M-70 never actually flew, but Unflown Wings has two photos of a small display model. The M-70 would have been a graceful, streamlined, needle-nosed aircraft with two engines on top of the wings—generally a good idea for jets floating in the water—and two more high up on the tail. Particularly distinctive is the undercarriage, which would have consisted of a retractable nose ski and wingtip skis, as well as a retractable hydrofoil under the fuselage. The three-man aircraft would have refueled by submarine; in fact, the plan would have been to build several tanker subs that would probably have resembled the Nazi “milk cow” subs that refueled German U-boats.

Unfortunately for the M-70, Myasishchev was also designing two land-based supersonic bombers that could also fly about five thousand miles, and some managers at the design bureau worried that a seaplane-bomber could never match the aerodynamic performance of its landlubbing counterparts. For targets closer to the Soviet Union, within two thousand miles or so, regular land-based bombers or cruise missiles would suffice.

But it was ballistics that really killed the M-70, and most of the other exotic bomber concepts of the 1950s and early 1960s. Or more specifically, ballistic missiles with intercontinental flight times that could span continents in minutes rather than hours.

A nuclear warhead for the first Soviet ICBMs had been tested in May 1957, and “this suggested that spending money on large and expensive supersonic flying boats and bombers could be a huge waste,” according to Gordon and Komissarov.

It was the swan song for the floating bomber.