The M1 Abrams Journey to the Top 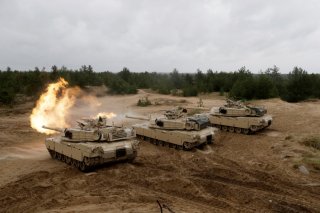 Here's What You Need to Know: The M1A1 was developed as a powerful upgrade to the basic M1. While the M1 Abrams was outgunned when it first entered production, since the M1A1 entered service in 1985 it has become one of the most lethal tanks in the world with its 120mm gun. It remains to be seen whether this will continue into the future, or whether American tanks may have to be upgunned again to meet future threats.

The next-generation British 110mm tank gun and German 120mm tank gun were also considered for incorporation on the XM1. However, the German gun was found to have some difficulties in development when the XM1 program was about to finish. As a result, the XM1 had a provision to mount the 120mm in its trunnion design but mounted the 105mm M68A1 that armed the M60 Patton.

The M829A1 was proven in combat during Operation Desert Storm, defeating Iraqi T-55s and T-72Ms with ease. Despite its increased penetration and combat success against Iraqi tanks, the M829A1 was estimated to be unable to defeat its Soviet contemporaries, the T-80U and T-72B Obr. 1989, which were fitted with Kontakt-5 second-generation heavy explosive reactive armor (ERA), which could decrease the penetration capability of APFSDS rounds.

As a result, the Army developed the M829A2 and M829A3 rounds, which featured increased-length penetrators and special tips to defeat the heavy ERA threat. The M829A3 round is the current wide issue for M1A1 and M1A2 Abrams crews and likely can defeat the armor of most tanks in the world today, including early T-72B3s and T-90As which still use Kontakt-5 ERA.