The M1014: Inside the U.S. Marine Corps’s Combat Shotgun 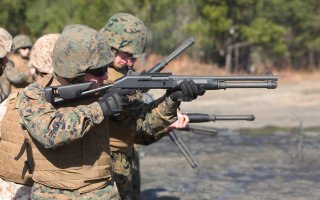 The story of the M1014 is fascinating. The Marine Corps rarely gets to be the lead on a joint service project. The small size and limited resources of the Marine Corps often make them second to the Army when it comes to searching out new small arms. However, in 1998 the USMC got their opportunity, and as the Marine Corps tends to do, they charged forward, ready to deliver the best possible option.

The U.S. Army Armaments Research, Developments, and Engineering Center, aka ARDEC, put out the solicitation for a new semi-automatic combat shotgun. The Marine Corps was tapped to lead the project and quickly developed a set of requirements. Benelli, an Italian shotgun firm well known for its shotguns, submitted their newly developed M4 shotgun.

The USMC put the gun through the wringer, and the M4 proved successful. The M1014 killed it and won the competition. Subsequently, the Marines order 20,000 of them.

The Benelli M4 became the M1014 Joint Service Shotgun. Shotguns in the military were traditionally manually operated designs. With these other shotguns, troops have to manually operate a pump-action between shots. The Benelli M1014 changed the game by being a semi-auto design.

Like the rifles issued to troops, the weapon fired once per trigger pull and did not require a manual action between shots. The M1014 did not fully replace pump-action shotguns in military inventories but augmented it. A pump-action shotgun can handle less-lethal loads due to the manual operation. These less lethal shells are not powerful enough to cycle the semi-automatic M1014.

The M1014 is a pure combat shotgun designed for fighting in close quarter’s situations. Benelli built the M1014 from the ground up to meet the Marine Corps requirements. Marines wanted a shotgun that could reliably function and work with various optics and attachments. Benelli’s previous shotguns, the M1, M2, and M3, were inertia-operated.

Inertia-based guns are fascinating and are very capable weapons. Inertia-based guns fail when users start adding weight in the form of optics, accessories, and so forth and so on. Gas-based guns, like the M1014, are not affected by the addition of weight.

Gas-based shotguns existed before the M1014, but and Benelli did things differently. Benelli invented the ARGO gas system for the M4 series guns. ARGO stands for auto regulating gas system. As the name implies, the ARGO system automatically adjusts to varying power levels and lengths.

Gas drives two stainless steel pistons to operate the action. These pistons drive the bolt rearward and eject the fired shell, cock the hammer, and loads the next round.

The M1014 hit the fleet in 1999, and two short years later, the Global War on Terror kicked off. Marines deployed with a wide variety of weapons, and the M1014 was one of them. Pictures from the GWOT started showing the M1014 in action. Shotguns rule close-range fighting, so they are somewhat niche.

Troops often carry a rifle and shotgun, something I did when issued a Mossberg 590A1. In the Battle of Fallujah, shotguns cleared rooms, breached doors, and worked checkpoints.

The United States isn’t the only user of the M4 shotgun. The SAS also issue the weapon, and famously the gun eliminated five ISIS insurgents in mere seconds. The SAS partnered with MI6, and Iraqi Special Operation pulled off an early morning raid on a bomb-making factory. The pointman entered and quickly took down five armed insurgents.

Shotguns in close quarters absolutely dominate. Semi-automatic shotguns dominate close-quarters combat, and while that role is small, it’s important. The Benelli design has proven to be extremely popular and more than capable in that role.

As a Marine, I only handled the M1014 as a familiarization exercise. The Corps gave me a Mossberg 590A1, and the M1014 was a pipe dream. However, I’m a free man and a gun nerd, so I did the American thing and purchased one.

You can read all about a piece of gear, but until you experience it’s tough to grasp. That’s especially true with the Benelli M4/M1014. Once you handle the gun you know why the USMC chose it.

Firing a shotgun means getting a beating most of the time. However, the gas-operated design reduces recoil significantly. Firing accurate and fast follow-up shots is boringly simple. That’s critical for close quarter’s battle scenarios that rely on speed and decisive action.

The ARGO system allows for reliable operation that’s not ammo picky and does require constant cleaning. It can take a real beating and not be fouled by dust, carbon, and whatever else the world throws at it. Semi-auto shotguns are ammo picky and often unreliable in harsh conditions. The M1014 changed that perception and became the king of combat shotguns.

The M1014 has been successful now for more than two decades. Deployment of the M1014 is rare, but when it’s needed, there is no better option. The Marines do most things well, and the M1014 exemplifies that.