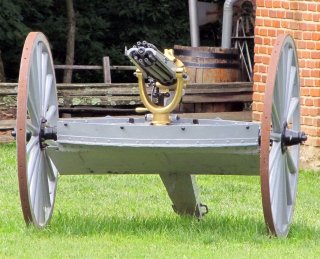 Here’s What You Need to Remember: While this might seem like cutting edge twenty-first-century technology, the original M61 was developed after World War II by General Electric and first introduced in 1956, but the concept to utilize multiple barrels dates back a century earlier.

It isn’t possible with the human eye to see a bullet as it leaves the muzzle of a gun, but in the case of the General Dynamics M61A2 20mm rotary cannon, it isn’t just a single bullet that can’t be seen but literally hundreds each second! With a rate of fire that exceeds 6,600 rounds per minute that is more than 100 rounds leaving the barrels each and every second.

While this might seem like cutting edge twenty-first-century technology, the original M61 was developed after World War II by General Electric and first introduced in 1956, but the concept to utilize multiple barrels dates back a century earlier.