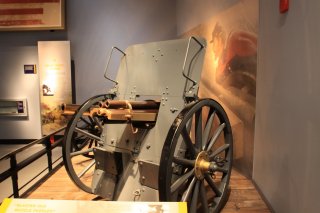 Here's What to Remember: In the modern infantry, machine gunners utilize their weapons to lay down a wall of lead to pin down or destroy an enemy force. So, it may come as little surprise that the Marines appreciate these weapons so much that machine gunners get their own MOS (Military Occupational Specialty) separate from your average rifleman.

Remember the Maine. To Hell With Spain!

The Marines’ affinity for these lead-spreader makes sense, as the Corps helped shape the use of machine guns in modern conflict way back in 1898, during the Spanish-American War. After the U.S.S. Maine sank in Havana Harbor on February 15, 1898, calls of “Remember the Maine! To Hell With Spain” rang out across the country. And as luck would have it, the Marines were uniquely positioned to fight in this sort of war. Cuba, after all, is an island, and Marines excelled at ship to shore operations.

As such, the 1st Marine Battalion responded to the call and landed at Guantanamo Bay, Cuba, on June 10th, 1898. They landed unopposed and were the first American military unit to plant the flag of the United States on Cuban soil.

They did this before the Army had even left the United States. The relative peace they encountered upon their arrival didn’t last, and the Marines knew it wouldn’t. With them, they carried the new 6mm Lee Navy, a fantastic and modern rifle for the time. Alongside it, they carried the Colt-Browning Model 1895 machine gun, also in 6mm Lee Navy.

Both weapons were high-tech at the time. The rifle featured a straight-pull bolt and used a unique and rapid loading clip system. The M1895 was an early machine gun that gained the name potato digger due to the operating lever that cycled out of the bottom of the gun. The Colt-Browning was superbly modern and weighed 35 pounds, which was light compared to the 60 pound Maxim guns that were also available in this era.

At the time, the Army was still using mule pulled Gatling guns, and when compared, the M1895 might as well have been a space-age piece of technology. Its lighter and smaller nature allowed the Marines to actually carry the guns during various portions of the Battle For Guantanamo bay.

The Marine machine guns get some

The Marines carried four M1895 Colt-Browning machine guns to shore, and they became invaluable in the Battle for Camp McCalla. Camp McCalla was tactically unsound, and in hind sight it seems clear that Marine leadership fell prey to complacency. They didn’t expect a battle and didn’t bring their artillery company ashore. They didn’t dig trenches, and the camp was on open sand.

You can’t predict the Spanish inquisition, but Marine leaders should’ve predicted a Spanish attack. At daybreak, June 11th, the Spanish did just that, with guerillas attacking the camp in force.

The guerillas may have had the advantage, but the Marines had the machine guns. They fended them off and chased them until night fell. But the victory was to be short lived. The Spanish may have failed to take the beach in their first try, but they had a significant numerical advantage. By some accounts, Spanish forces outnumbered the Marines by more than five to one.

As wave after wave of Spanish guerillas attacked, the Marines dug in, got two additional machine guns set up, and unloaded their artillery.

They fought for 100 hours against the Spaniards and held their own despite their poor positioning and the overwhelming odds. On June 13th, a unit of 60 Cubans arrived to support the Marines, led by Lt. Col. Enrique Thomas. Soon thereafter, Thomas advised the Marine officers to attack the Cuzco Well, the only nearby source of freshwater, to force the Spanish into a retreat.

Machine Guns, Spaniards, and the Well

The Marines saddled up, and 160 of them, plus 50 Cubans, began their way to Cuzco Well on June 14th, 1898. They brought three of their four machine guns with them.

After fighting through the heat of the day, perilous terrain, and brutal undergrowth, the Marines arrived at the base of the steep hill around Cuzco Valley. Unfortunately, they arrived at almost the same time as a sizeable number of Spanish forces.

They assaulted up the hill, and the Marine’s M1895 Colt-Browning machine guns poured lead into the Spanish troops nearby. The light 6mm rounds made it easier for Marines to carry extra ammunition so they could afford to use their belt feds to their full advantage.

The machine guns laid down covering fire, supporting the Marine’s assault up the hill. Historically speaking, this was the first time Marines used machine guns to support an infantry assault. But in practical terms, the Marines grabbed M1895s and ran what we now consider to be a modern machine gun drill: Setting them up, shooting, then moving to continue support.

Since it weighed only 35 pounds, the Potato Digger moved easily. The machine guns acted as force multipliers for the Marines, and in fact, were a mobile assault force unto themselves.

In the end, the Marines defeated the Spanish, killing 60, wounding 150, and capturing 18 of them. On the winning side, two Cubans were killed in combat, with two Marines and two more Cubans wounded. The Marines destroyed the well and accomplished their objective.

The surviving Spanish fighters reported they had been attacked by 10,000 Americans, though the real figure was actually closer to 160. After that, Camp McCalla saw no further attacks by Spanish forces.

The Effect on Modern War

During the Battle of Guantanamo Bay, the machine gun established itself as a fight-changing weapon. Although the lessons learned in the Spanish-American war would be echoed on a massive scale in World War I a little more than a decade later, the Marines had proven that mobile machine guns were incredibly valuable, and when used properly, can inflict physical and moral damage upon an enemy.

To this day, Marine Machine gunners run gun drills where they rapidly set the machine gun in place with bipods, ammo, etc. They then take it down and do it again, over and over, much like the machine guns at Cuzco Well. To do this day, machine guns in the offensive are used to support infantry assaults and lay down suppressive fire. This allows riflemen to move quickly and swiftly to their objectives.

Travis Pike is a former Marine Machine gunner who served with 2nd Bn 2nd Marines for 5 years. He deployed in 2009 to Afghanistan and again in 2011 with the 22nd MEU(SOC) during a record-setting 11 months at sea. He’s trained with the Romanian Army, the Spanish Marines, the Emirate Marines, and the Afghan National Army. He serves as an NRA-certified pistol instructor and teaches concealed carry classes.