Many Obstacles Remain Before Afghanistan Will Be At Peace 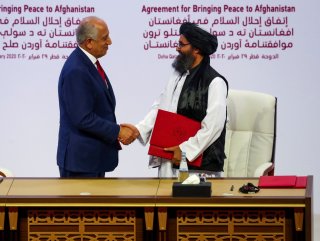 The 11 September launch of intra-Afghan negotiations in Doha is yet to translate into formal dialogue between the Afghan government and the Taliban. The embattled Afghan stakeholders are still labouring over modalities of talks before they can get into the nitty-gritty of the future political map and things are unlikely to get much easier.

Unusual euphoria accompanied the ceremony in Doha. Yet the intricate nature of preliminary discussions, and a simultaneous rise in violence in northern Afghanistan, suggests a tedious path ahead — a path loaded with bloated egos, ideological disagreements, and the competing interests of Afghanistan’s neighbours.

US special envoy for Afghan peace Zalmay Khalilzad pointed to potential roadblocks hours before the inaugural ceremony. ‘There are spoilers who don’t want the peace process to take place or to go forward, and there are people who prefer the status quo to a peace agreement’, said Khalilzad when asked who might have orchestrated an attack on Afghan Vice President Amrullah Saleh only two days before the momentous Doha talks.

Khalilzad delivered this warning in his remarks to reporters via video conference from Doha. It coincided with the anniversary of the terrorist attacks in New York and Washington in 2001 that changed the course of the global security paradigm.

The spoilers then were non-state actors — Al-Qaeda, and their Taliban hosts — who invited the wrath of the United States. As a result, the United States, in coalition with most NATO members, launched what became the West’s longest overseas combat engagement — the War on Terror in Afghanistan, Iraq, Somalia, Syria, Libya and also, somewhat, in Pakistan. This saw the displacement of over 37 million people and at least 800,000 deaths.

The spoilers that Khalilzad spoke about are underpinned by one factor — perpetuation of the status quo to fuel the war economy. Terrorist organisations such as Daesh (the so-called Islamic State) are the most obvious ones, having been responsible for most of the violence in the last few months.

Another potential spoiler is the Taliban itself, a group known for its radical interpretations of Islam. Though statements by their leaders in Doha suggest they have adopted a more liberal worldview, only the coming weeks and months will shed light on how much has changed.

One could, of course, list state actors such as Afghan President Ashraf Ghani, Marshal Abdul Rashid Dostum and Vice President Amrullah Saleh as spoilers within, once they see their interests are seriously threatened. Fear around potential loss of political power and irrelevance often drive resistance to any change in the status quo. How else should one interpret the fierce string of attacks by Afghan forces against ‘terrorists’ in northern Afghanistan since the Doha ceremony? Are President Ashraf Ghani and his close aides ready to embrace an interim government comprising Taliban?

Is it the possible India–Pakistan proxy war, driven by their respective interests, that threatens Afghanistan’s journey towards peace, or Iranian disapproval of the US presence in its backyard? Or is it the US war economy that could motivate some to keep the cauldron boiling in Afghanistan?

US President Donald Trump suggested as much in his 7 September White House press conference: ‘The top people in the Pentagon probably aren’t [happy] because they want to do nothing but fight wars so that all of those wonderful companies that make the bombs and make the planes and make everything else stay happy … But we’re getting out of the endless wars’.

In recent interviews Pakistani Prime Minister Imran Khan also warned against the influence of ‘spoilers’ — and singled out India. As for Pakistan, it seems to have learned lessons from the way its military leadership dealt with Afghanistan in the past. Reeling from the consequences of negative perceptions abroad because of its security-centric policies, the civil-military leadership seems to be focused on peace in Afghanistan — which they believe is critical to long-term peace and stability in Pakistan.

The good news is that despite competing interests in Afghanistan, the Afghan policies of the United States, Russia, China, Iran and Pakistan are now seemingly aligned with the US–Pakistan-led push for reconciliation. That is the best part of the entire process so far. The risk to this grand international consensus comes from the internal and external influencers who continue to resist a formal political role for the Taliban in Afghanistan. That is also evident from the fact that, over two weeks into the Doha talks, the Taliban refuse to budge from their insistence on treating their 29 February accord with the United States as the foundation for the way forward. Their Kabul interlocutors, reconciliation council Chairman Abdullah Abdullah, disagree and warn of breakdown if the Taliban remain inflexible.

In all likelihood, spoilers will continue to weigh heavily on the peace process as ‘disruptive forces’ in coming months, even if the negotiators narrowed down their ideological divergences. Progress in Doha could also depend on how, and if at all, India and its supporters in Kabul adjust to new realities.

Imtiaz Gul is Executive Director at the Center for Research and Security Studies, Islamabad.