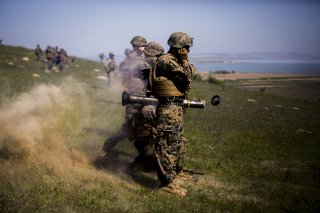 The U.S. Marine Corps continues to focus on fast, lethal, and targeted expeditionary warfare with an eye toward islands in the Pacific.

Small, mobile units of Marines recently flew on an Air Force C-17 as part of a maritime warfare exercise to conduct high-intensity “island hopping” attacks to secure and defend vulnerable island areas in the Pacific.

The “Iron Sky” exercise was described in a Marine Corps press release as Expeditionary Advanced Base Operations (EABO).

“EABO is a form of expeditionary warfare that involves the employment of mobile, low-signature, and easy to maintain and sustain naval expeditionary force to conduct sea denial, support sea control, or enable fleet sustainment. The Marine Corps relies on exercises like Iron Sky to strengthen force protection and expand the capabilities of Marines in the Pacific,” the press release says.

The focus of Iron Sky was deploying quickly to protect small, isolated areas. The cooperation between the Marine Corps and Air Force was a multi-domain operation in the Pacific theater.

“We are testing the capabilities that we can take a small force to an isolated area and be able to secure it in a rapid manner,” U.S. Marine Corps Staff Sgt. Robert Stauffer said in the press release. “Our mission is to come from the defensive position. We are working off of limited information in an isolated area and seeing exactly how we are able to defend it.”

The Marine Corps’ ability to seize or defend small island areas could be significant. Islands in a vast maritime expanse offer staging areas or multi-domain attack potential. For instance, a unit traveling on a C-17 could deploy with rockets and land-based artillery to establish a firebase or landing strip.

Areas such as Japan’s Ryukyu Islands or territory in the South China Sea could be areas for U.S. or allied forces to secure. The Department of Defense’s multi-domain strategy centers on air-land-sea operational areas such as the Pacific, where weapons on land could be used to attack maritime targets. Defending islands could also function as a deterrent against Chinese aggression and provocations in sensitive areas by positioning a countervailing force. These areas could also operate as a command and control or surveillance node to detect potential enemy activity and threats. An island could ensure persistent surveillance should maritime assets not be able to remain on station indefinitely. Threats could be detected from island outposts and quickly transmitted to surface, air, and undersea assets in position to respond.