The Marines' Future Taser Is More Sniper Than Pistol 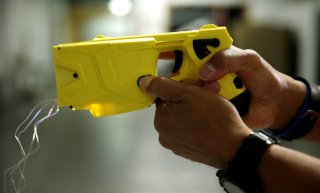 Here's What You Need To Remember: The Marines want a weapon that can incapacitate for more than three minutes, which suggests a fine line between enough jolt to stun and enough to kill. Furthermore, the target might be wearing body armor that the HEMI round must penetrate. And a bullet powerful enough to travel more than 300 yards but not injure the target through blunt force might be a challenge.