The Marines' M110A1 Sniper Rifle Can Do Some Serious Damage 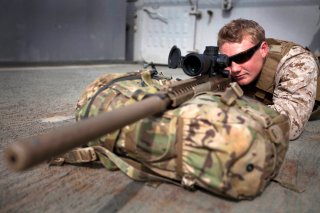 Here's What You Need To Remember: The M110A1 promises to give the Army a weapon capable of hitting targets with a high degree of first-round accuracy at up to 600 meters. It will be essential to train soldiers to properly employ the weapon—even a 7.62-millimeter round will drop 99 inches at 600 meters and experience a horizontal shift of 33 inches in a light breeze. That having been said, the M110A1 will deliver for trained marksmen, resulting in a more lethal infantry squad than ever before.

The U.S. Army is preparing to issue thousands of new rifles to infantry squads across the service. The M110A1 Squad Designated Marksman Rifle (SDMR) is designed to extend the reach of infantry units largely equipped with short-barreled carbines. The SDMR will give one in nine infantrymen the ability to not only penetrate existing body armor but engage point targets at ranges of 600 meters (1968 feet).

The standard nine-person U.S. Army infantry squad consists of two fire teams led by a squad leader. Each fireteam consists of two riflemen with M4 carbines, one grenadier with an M4 carbine and grenade launcher, and an M249 squad automatic weapon. A squad can produce a tremendous amount of firepower, with the M4 effective out to 500 meters and the heavier, faster-firing M249 effective out to 1,000 meters.

The current organization has its drawbacks. While the M4 is accurate, it often lacks a magnified optic to make accurate shots at medium to long ranges, and the 5.56 round drops sharply after 400 meters. The M68 red dot sight is durable and “soldier proof,” but it lacks the ability to zoom in on, evaluate, and engage prospective targets at ranges greater than those feasible with the naked eye. The M249 fires at up to 850 rounds per minute but it is relatively inaccurate and meant to deliver suppressive fire against the enemy, keeping their heads down while the rest of the squad maneuvers against them.

During the Iraq War, the U.S. Army recognized the need for a rifle-type weapon with a magnified optic that had the range to discern and engage targets at extended distances. The Army sent thousands of M14 battle rifles, placed in storage before the Vietnam War, to armorers for an update. The result, the M14 Enhanced Battle Rifle (EBR), was a 7.62-millimeter caliber rifle (as opposed to the M4’s 5.56-millimeter) with a Leupold 3.5-10x variable power scope. This combination of a rifle scope and heavier caliber round allowed a trained soldier to engage distant targets beyond that of the M4 carbine. Alternately, a designated marksman could provide security for his unit, overwatching their position or area of operations from a clear vantage point.

Unfortunately, the M14 EBR was a mixed bag. Although the EBR reintroduced the powerful 7.62 round to the squad and gave the squad leader a magnified optic, the M14’s operating system is old and the M14 series of weapons are notoriously difficult to maintain accuracy in the field. The system was also heavy, weighing fourteen pounds with a loaded twenty-round magazine. The gas piston system and new handguard also made it front heavy and more difficult to quickly aim.

On July 12th, German arms manufacturer Heckler and Koch announced it would produce between 5,000 and 6,000 new M110A1 Squad Designated Marksman Rifles for the U.S. Army. Heckler and Koch will manufacture the rifles in Oberndorf, Germany, then ship to an H&K facility in Georgia. Once there, they will be fitted with rifle scopes, scope mounts, and at least ten other accessories specified by the U.S. Army.

The M110A1 is based on the Heckler and Koch G28 rifle, which is in turn based on the company’s HK417 rifle. The M110A1 bears some resemblance to the M4 carbine and is similar in layout, with the magazine release, safety, charging handle, all in the same locations. Loading, shooting, and jam clearing procedures methods are very similar or or identical to the M4. A significant difference under the hood is the M110A1 uses a piston operating system instead of the M4/M16’s direct impingement system. The use of a gas piston system results in a weapon that avoids the risk of overheating while requiring less cleaning in the field.

The M110A1 is an accurate weapon, with the company claiming a guaranteed accuracy of 1.5 minutes of angle (MOA) at 100 meters. Generally speaking, that means a trained shooter should be able to place all of his or her shots within a 1.57-inch circle at 100 meters. At longer distances, however, that circle opens up proportionally, with the same rifle and shooter placing shots within a 9.42-inch circle at 600 meters. Given that the average combatant is about eighteen inches wide at the shoulders, that still gives a high probability of hit if aiming center of mass.

The U.S. Army is fitting the M110A1 with the Sig Sauer Tango 6 optic. The Tango 6 is a variable power optic capable of swinging from 1x unpowered view all the way up to 6x magnification. Six power magnification allows for a good amount of zoom while maintaining an excellent field of view. The reticle is calibrated for the 7.62-millimeter round, allowing a marksman to quickly compensate for bullet drop at longer ranges. It also features a ACOG-style red dot horseshoe for fast target acquisition in low light and daylight, allowing the marksman to use his rifle like any rifleman. According to Sig Sauer, the Army is buying 6,069 Tango 6 scopes, giving a clue that the total number of rifles ordered is likely to be on the high end of Heckler and Koch’s sales estimate.

The M110A1 promises to give the Army a weapon capable of hitting targets with a high degree of first-round accuracy at up to 600 meters. It will be essential to train soldiers to properly employ the weapon—even a 7.62-millimeter round will drop 99 inches at 600 meters and experience a horizontal shift of 33 inches in a light breeze. That having been said, the M110A1 will deliver for trained marksmen, resulting in a more lethal infantry squad than ever before.