Masked Military: The Army is Doubling Down on Face Masks Through 2021 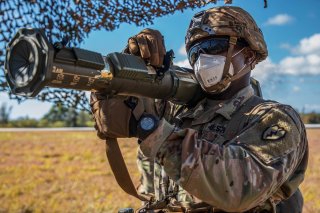 Here's What You Need to Remember: Prototypes of the APFU-M are in development and the Army is working with the United States Air Force and United States Marine Corps on their respective past maternity uniform efforts in order to expedite pattern development

Even as the vaccine for the coronavirus is now rolling out across the United States, it could be months before every American can be vaccinated. As a result, mask mandates are likely to remain in place across many parts of the country well into the spring and possibly even the summer.

Seeing that face masks will be required for the foreseeable future—not to mention that masks could be required for a future pandemic—the U.S. Army has responded with an official Army-designed, -tested, and -refined face mask. It even has an official military designation: Combat Cloth Face Covering (CCFC), and it will be provided to new U.S. Army soldiers during the second quarter of fiscal year 2021 (FY21). The mask was one of the updates provided by the Army Uniform Board (AUB) during its 152nd meeting on Nov. 18.

Throughout the current novel coronavirus pandemic the Army has provided disposable as well as reusable, solid color masks to soldiers, and also permitted the use of neck gaiters and other cloth items, including bandanas and scarves, as face coverings.

This past summer, the AUB recommended and the U.S. Army Chief of Staff Gen. James C. McConville approved the issue of CCFCs to soldiers at Initial Entry Training (IET) as part of their clothing bag. It was announced at the 152nd AUB that the Defense Logistics Agency (DLA) would begin to issue two CCFCs to each new soldier during the Q2 FY21.

Additionally, CCFCs will be available for purchase at the Army & Air Force Exchange Service (AAFES) uniform stores later in FY21.

The Army noted that the CCFC was designed, developed and produced along an expedited timeline. Whereas it can normally take 18 to 24 months for the DLA to make an item available for order once the technical description, design and components are approved and slated—the CCFC, from inception to issuance, is slated to take less than a year.

The current U.S. Army guidelines for face coverings stated, “SOLDIERS ARE AUTHORIZED TO WEAR THE NECK GAITER AND OTHER CLOTH ITEMS, SUCH AS BANDANAS AND SCARVES, AS FACE MASKS. TO PROTECT THE FACIAL AREA, THE CLOTH ITEM MUST COVER THE MOUTH AND NOSE AND EXTEND TO THE CHIN OR BELOW AS WELL AS TO THE SIDES OF THE FACE. THE ITEM MUST ALSO BE SECURED OR FASTENED TO THE FACE IN A MANNER THAT ALLOWS THE SOLDIER TO BREATHE WHILE ALSO PREVENTING DISEASE EXPOSURE OR CONTAMINATION.”

The guidelines also stated that the soldiers may not wear masks that have “PRINTED WORDING, PROFANITY, RACIST, DEMEANING OR DEROGATORY LOGOS, SCRIPT OR IMAGERY.” Moreover, soldiers are not allowed to cut up clothing materials such as the Army Combat Uniforms to use for face masks as those materials may have been treated with chemicals. Any fabrics used for face coverings are required to be subdued and conform to the uniform.

Leaders were asked to use their “best judgment” regarding the color cloth and design of face masks, while soldiers were instructed to replace items that became soiled, damaged or difficult to breathe through.

Beyond the face masks, the AUB also received updates on the implementation status of four other uniform changes from the 151st AUB, which took place in June 2020.

These include an Improved Hot Weather Combat Uniform-Female (IHWCU-F), which is expected to be added to the clothing bag in Q4 FY21 and available for purchase in Q2 FY22; a Hot Weather Combat Boot-Improved (HW ACB-I), expected to transition to DLA Troop Support for new contracting action in Q2 of FY21 and available for purchase by FY24; Black Athletic Socks, estimated to be available in the clothing bag in Q2 of FY22; and the Army Physical Fitness Uniform-Maternity (APFU-M).

Prototypes of the APFU-M are in development and the Army is working with the United States Air Force and United States Marine Corps on their respective past maternity uniform efforts in order to expedite pattern development. Form, fit, and function evaluations are expected to occur in Q3 of FY21. Additionally, the AUB discussed additional clothing articles, including items for new and expecting mothers. More information will be provided about these discussions in 2021 after Senior Leader decisions are made the Army noted.