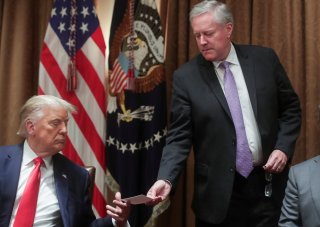 White House chief of staff Mark Meadows says the Trump administration is contemplating some type of regulation for social media companies as part of the COVID-19 relief legislation being negotiated with Congress.

“As much as I’m a guy that says that the social media companies should be able to have their own—what I would call a wild, wild West way of doing things … I’m over it,” Meadows said Friday in a livestream interview with American Conservative Union Chairman Matt Schlapp.

“This censorship has gotten to the point where if they are going to censor, then I’m going to make sure they are regulated,” Meadows said, reflecting President Donald Trump’s thinking.

During the week, Twitter removed a post by Trump that correctly stated children are less likely to get COVID-19 than adults. In May, Twitter issued a questionable “fact check” on one of Trump’s tweets on problems with mail-in voting.

In addition to Trump, there have been other cases of technology companies’ censorship of conservatives, including YouTube’s blocking of The Heritage Foundation and Prager University.

Meadows, who represented North Carolina’s 11th Congressional District from 2013 until becoming Trump’s chief of staff last March, wasn’t clear on the specifics of what any proposed legislation might involve.

“The president has, as you know, put forth a few executive orders, but even in this package—we’ll make news here—we’re looking at, ‘What do we do with regard to some of the protections that social media companies have?’” he said.

Social media platforms have not faced regulations as broadcast media have. Nor could they be held liable for information on their platforms as print or online media could, because they aren’t publishers per se.

However, the platforms have come under scrutiny for picking and choosing content, while not facing accountability.

“We ought to address that in this package we have right now—in the emergency package,” Meadows said. “We’re talking about freedom of the press, freedom of expression. And yet what we have are a number of companies that have decided on what should be communicated and what should not be communicated. And it is very troubling.”

The chief of staff continued:

We’ve seen videos taken down. We’ve seen posts taken down. Ultimately, if you’re allowing the social media companies to be the determiner of free speech, you’re in a very dangerous place.

I spoke to the president last night about actually addressing that in this particular package.

It’s perfectly fine for every employee of those social media companies to advocate personally for their candidate of choice, whether it’s the far left or the far right, or someone in between. That’s America.

It’s totally inappropriate for those same people who work at a company to allow the company to put, really, the market cap and the power of these big social media companies on that level, on that scale of justice, to say we are going to determine what you see and what you view, and what is right and what is wrong. It’s inappropriate.

The CEOs of Amazon, Apple, Facebook, and Google testified July 29 before the House Judiciary Committee’s antitrust, commercial, and administrative law subcommittee, and denied any political bias.

Still, Rep. Jim Jordan, R-Ohio, noted during the hearing that Google temporarily removed the home pages of Breitbart and The Daily Caller and threatened to demonetize The Federalist. All three are conservative media outlets.