Meet the 5 Deadliest Guns in the History of War 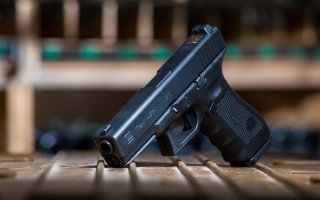 Here’s What You Need to Remember: Modern warfare has seen breathtaking advances in the last hundred years, as mortal competition between nations spawns successively deadlier weapons. Aircraft, missiles, tanks, submarines and other inventions—many of which did not exist in practical terms in 1914—have quickly earned key positions in the militaries of the world.

Yet there is still one invention that, although conceived more than five hundred years ago, still has a vital place on today’s battlefield: the infantry weapon and supporting arms. No matter how high-tech the armed forces of the world have become, warfare since the end of the Second World War has consistently involved some form of infantry combat.

The original M16 led to the improved M16A1 by 1967, and the M16A2 by 1986. The M16A3 was a short-run rifle built for Navy SEALs, while the M16A4 has become a standard issue in the U.S. Marine Corps. The M4A1 carbine, currently the standard-issue infantry weapon for the U.S. Army, is identical except for a shorter barrel, collapsible stock and the ability to be fired fully automatic.

The M240 is the American version of the FN-MAG designed in the 1950s by the Belgian arms maker Fabrique Nationale (FN). Utilizing features from both Axis and Allied infantry weapons, the MAG, as it was known, became wildly popular and standard issue with many NATO countries. In the years since its introduction, the MAG has served from South Africa to the Falklands, to Afghanistan and Iraq.