Meet the B-32 aka The Dominator aka Hobo Queen 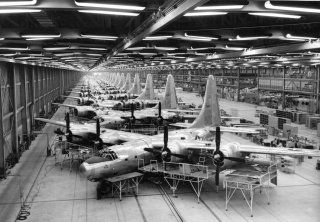 Here's What You Need To Remember: the B-32 is most visually distinguished by its enormous tail which stretched ten meters tall. The Dominator wound up resembling the B-29 in key performance parameters: both aircraft used four Wright R-3350-23 Cyclone engines for power, had a maximum speed of around 358 miles per hour—as fast as an early-war Bf-109E fighter—and could lug a huge bomb load of 20,000 pounds.

However, the Superfortress actually had a little-known rival developed by the manufacturer Consolidated, better known for its mass production of the B-24 Liberator heavy bomber. Had the Superfortress failed to perform as expected, the so-called B-32 Dominator was to be the fallback option. However, the B-29 actually did end up performing according to expectations when it began operations in the Pacific Theater in 1944, but Consolidated still produced more than a hundred B-32s which were deployed into action in mid-1945. In fact, Dominator crews fought the last U.S. air battle of World War II—tragically, after the war had ended.

The program for a super-heavy bomber actually predated Pearl Harbor. However, Consolidated’s project, which used the B-24 as its basis, fell considerably behind Boeing’s development of the B-29. The hulking bomber went through several permutations—its original design included a twin-rudder tail and bizarre configuration mounting 20-millimeter cannons to fire rearward from each engine nacelle, but these elements were eventually ditched.

On the other hand, the B-32 had a nearly 20 percent greater range of 3,800 miles and could maintain a much higher cruising speed of 290 miles per hour, compared to 230 for the B-29. The Dominator also benefited from reversible-pitch propellers and the thick Davis wing inherited from the B-24, which minimized drag at lower speeds—an especially useful quality while attempting to land.

The 386th was fully outfitted with B-32s in July, and in August was redeployed to Yontan airfield at Okinawa where it was reassigned to flying photo reconnaissance missions over Japan. On the evening of August 15, Emperor Hirohito made a speech declaring his intention to surrender and ordering the armed forces to cease resistance. While anticipating the surrender of Japanese forces on the USS Missouri on September 2, the Army Air Corps continued reconnaissance overflights of Tokyo to verify compliance with the terms of surrender and scout out the road network for the occupation forces.

However, Japanese fighter pilots on the ground perceived the overflying bombers in a different light. One Japanese ace, Saburō Sakai, later claimed that they feared the American bombers were returning to bomb Tokyo in violation of the surrender and decided they were justified in attacking them.

To put things in perspective, earlier that year on March 9, 1945, American B-29s had dropped thousands of cluster bombs loaded with napalm bomblets over working-class residential areas of Tokyo, igniting a firestorm that sucked the air out of lungs and melted concrete. The conflagration killed around 100,000 Japanese civilians—more than died in either atomic bombing.

Thus on August 17, Japanese fighters intercepted the reconnaissance B-32s and harried them for two hours while the bomber crews shot back with .50 caliber machine guns, neither side inflicting much damage on the other. The surprised bomber unit decided to dispatch of a follow-up recon mission on August 18 to investigate whether the intercept was an isolated incident. It’s worth noting that that same day, Japanese forces in the Kuril islands also engaged in air battles against Russian aircraft supporting a surprise amphibious invasion, another post-surrender conflict that would take several days to sputter to a halt.

In fact, records show fourteen A6M Zero fighters and three N1K-J Shiden (“Lightning”) fighters launched to intercept from Yokusuka airbase. The Shiden was one of the best Japanese fighters of the war, capable of exceeding 400 miles per hour and well-armed with four fast-firing 20-millimeter cannons, though it had relatively poor performance at high altitude.

Nonetheless, the aircraft swarmed over the larger B-32s, their machine guns and cannons chattering. The ten .50 caliber machineguns on each bomber were soon spitting back curtains of lead in response.

Both the bomber crew and fighter pilots on that last mission recalled what happened next. Screaming down from 12 o’clock high, Komachi raked the engine of the B-32 named Hobo Queen II with his 20-millimeter cannons and burst the plexiglass bubble of the top turret, wounding turret gunner Jimmy Smart. Another fighter strafed Hobo Queen’s fuselage, the rounds slicing through the plane and riddling the legs of aerial photographer Joseph Lacharaite. The wounded specialist began applying a tourniquet to his wounds, and fellow photographer Sergeant Anthony Marchione, a nineteen-year-old Italian-American from the Bronx, helped move him to a cot.

Marchione, however, bled to death thirty minutes after his injury and would bear the unfortunate distinction of being the last U.S. airman to fall in combat during World War II. His Italian immigrant family was stunned to receive notice of his death after the end of hostilities had been declared. The following day the Japanese military was compelled to begin removing the propellers from their aircraft to avoid further such incidents.