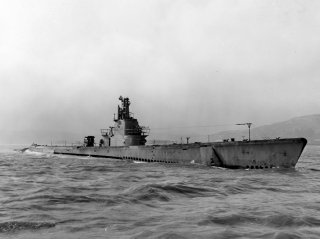 Here's What You Need to Remember: The Barb’s raids on the Japanese coast—and even those performed by Allied battleships—were premised on the Japanese military’s inability, by 1945, to effectively defend the home-island coastlines, which included a lack of coastal-defense guns. Many of the casualties of the Barb’s attacks were likely civilians in largely undefended towns. On the other hand, targeting civilian merchant ships was a standard practice undertaken by all sides in World War II.

Submarines still made use of deck guns during World War II, most of them ranging between three and five inches in caliber. These were used to finish off unarmed merchant ships or sink smaller vessels that could evade torpedoes—but also were occasionally directed to bombard coastal targets, such as in early-war Japanese raids on the coasts of California and Australia. The problem was that a single gun was unlikely to inflict much damage in a short amount of time, and the submarines were highly vulnerable to air, sea, and land-attack as long as they remained surfaced.

In 1942, the German Kriegsmarine actually tested submarine rocket artillery that could be fired underwater but gave up on the idea due to its impracticality. Rumors that Germany had modified their subs to launch V-2 ballistic missiles at the United States led to a vigorous and bloody submarine hunt in the closing weeks of World War II.

Over the following month, the Barb expended sixty-eight rockets on Shikuka, Shoritori, and Kashiho, mostly firing late at night at the near-maximum range. She also used her four-inch deck gun to bombard the towns of Kaihyo To, Shibertori, and Chiri. The attacks targeted civilian industrial sites, including a cannery, seal rookery, lumber yard, paper factory, and several small shipyards, as well as a military radio, radar, and lighthouse stations. When Japanese seaplanes began hunting the sub during the day, Fluckey retaliated with a volley of rockets aimed at the Shikuka military airfield. The Barb’s guns also destroyed more than three dozen civilian sampans, while its homing torpedoes took out local trawlers, tugboats, and a few large merchant ships.

The Barb’s most famous exploit did not involve those weapons. Observing trains passing along the Japanese coastline, Captain Fluckey hatched a scheme to dispatch a landing party to blow up one of the trains by burying the Barb’s fifty-five-pound scuttling charge (essentially a self-destruct device) under the tracks. Rather than using a timer, the explosives would be jury-rigged only to blow when the pressure of a passing train completed the circuit, a trick Fluckey likened to a childhood walnut-cracking prank. A landing party of eight was selected on the basis of their unmarried status and membership in the Boy Scouts. Fluckey believed the scouts would have better pathfinding skills.

At midnight on July 23, the Barb slipped up to within a kilometer of the shore, and a landing party commanded by Lt. William Walke paddled quietly to the beach. While three men took up guard positions—they encountered a sleeping Japanese guard in a watchtower, whom they left unharmed—the other five buried the demolition charge and managed not to blow themselves up jury-rigging the detonation circuit. They were furiously rowing back to the Barb when a second train passed.