Meet Battleship USS Nevada: She Was Torpedoed, Shelled and Nuked 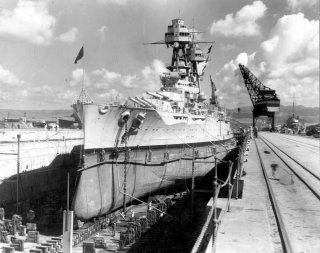 Here's What You Need To Remember: The Nevada is an unambiguous reminder of our Navy's heritage of resilience.

To say that the USS Nevada (BB-36) was "tough" would be a colossal understatement.

The warship was rushed into service during the First World War, survived Pearl Harbor, and during the Second World War supported the D-Day landings in Normandy and then the invasions of Iwo Jima and Okinawa. After the war, she served as a target during the July 1946 atomic bomb tests at Bikini in the Marshall Islands – but even that wasn't enough to sink her. Finally, off the Hawaiian Islands the U.S. Navy sunk the tough old warship with gunfire and torpedoes.

Now after more than 70 years researchers have discovered the wreck of the USS Nevada located 65 nautical miles southwest of Pearl Harbor. The ship is lying at a depth of 15,400 feet, and was found by underwater archeology specialists SEARCH and marine robotics company Ocean Infinity. The mission to find the famed U.S. Navy battleship was jointly coordinated between SEARCH's operations center and one of Ocean Infinity's vessels, Pacific Constructor.

The Ocean Infinity ship had set sail for a range of commercial tasks in the Pacific earlier this year before the outbreak of the novel coronavirus. As a result of the global pandemic the ship has remained at sea, and apparently used its time wisely!

"We are greatly appreciative to Ocean Infinity and SEARCH Inc. in relocating and providing information on an extremely historic vestige of our nation's past," said Rear Admiral Samuel Cox, U.S. Navy (Retired), director of the Naval History and Heritage Command.

"Nevada is an unambiguous reminder of our Navy's heritage of resilience," Cox added. "Nevada has a proud place in Navy's history – commissioned in 1916, she served in both World Wars, and was present at the Pearl Harbor attacks in 1941; the only battleship to get underway after the attack. During the attack, the ship and crew sustained at least six, and possibly, as many as 10 bomb hits and one torpedo hit, but remained in the fight. With our sailors' quick thinking, the crew grounded the ship, preventing her from sinking. The ship was repaired and immediately returned to the fight, proving the resiliency and toughness of our sailors then, as are today."

The USS Nevada had a long and distinguished career. The ship provided escort duties to convoys heading "over there" during the First World, and was then among the escort ships that sailed with the ocean liner George Washington, which carried U.S. President Woodrow Wilson to the Paris Peace Conference.

During the attack on Pearl Harbor, she had been stationed next to the famous USS Arizona but was the only battleship to get underway. A total of 60 of its 1,500-member crew were killed in the attack, while more than 100 more were wounded, but the crew was able to ground the vessel, which prevented it from completely sinking. Nevada was repaired and was the only battleship to be present at both Pearl Harbor and at Normandy for the D-Day landings.

The Nevada then played a key role in the invasions of Iwo Jima and Okinawa and survived a Japanese kamikaze attack on March 27, 1945, that left 11 of her crew dead and 41 wounded. A shell attack during the invasion also killed two of the crew and further damaged the ship.

As an aging warship, the Navy decided to use Nevada, along with about 100 other veteran vessels for target practice at the Bikini Atoll. On July 1, 1946, a 23-kiloton bomb dropped by a B-29 left the vessel seriously damaged and scorched by fire but still floating! A follow up underwater detonation sank other warships, but not Nevada. It was only on July 31, 1948, that the damaged vessel was finally sunk after being used in a Navy gunfire exercise.

"Rising from its watery grave after being sunk at Pearl Harbor, it survived torpedoes, bombs, shells, and two atomic blasts," added Delgado. "The physical reality of the ship, resting in the darkness of the great museum of the sea, reminds us not only of past events but of those who took up the challenge of defending the United States in two global wars. This is why we do ocean exploration to seek out these powerful connections to the past."

This article first appeared on May 14, 2020 and is being republished due to reader interest.