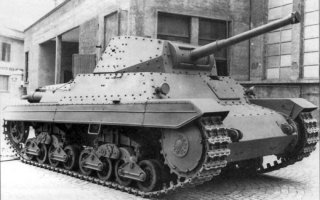 Here's What You Need to Know: The tanks were formidable, but arrived far too late to make a difference.

The Carro Armato P26/40 was a rare example of an Italian medium tank—the Italian army referred to it as a heavy tank, as it was heavy in comparison to Italy’s other vehicles, but it was roughly similar to America’s M4 Sherman, the Soviet T-34 and the German Panzer IV medium tanks.

Manufacturer Fiat-Ansaldo began design work in 1940. However, production wouldn’t begin in earnest until late 1943 after the Allies had already invaded Italy. The war in Italy then descended into a near-stalemate as German and fascist troops with the Italian Social Republic—a satellite regime which sprang up after Mussolini was deposed—kept the Allied armies at bay. As a result, only around 100 P40s or so were produced.

The P40 was formidable and the Germans—who were the primary users—liked the armor, which changed during the design phase to resemble the Soviet T-34/76. The P40’s armor had similar thickness to that famous Soviet tank.

Four crew members served inside the tank, with a driver and second crewman—operating a radio and an eight-millimeter Breda 38 machine gun—in the hull. The loader and the commander, who also operated the gun, sat in the turret, which was packed tight.

The 75-millimeter L/34 gun was adequate. German requirements conflicted with the 26-ton tank’s diesel engine, so the Germans sought to re-equip them with gasoline-powered ones.

In some cases individual P40s lacked engines altogether, so the Axis removed their turrets and shipped them to the front lines as static anti-tank guns. The tank had no internal intercom system, which coupled with the confined space, made it an unpleasant vehicle to operate.

The P40’s hull and turret were of riveted construction, not uncommon in World War II due to the ease and low cost to build, but already obsolete at that point in favor of welded hulls. “Spalling,” or flakes of shrapnel from an interior hull caused by a shell slamming into the exterior hull, posed a lethal threat to crews.

Rivets worsened the hazard, but Italy wasn’t alone here. British tanks often used rivets as did early American ones. It’s worth noting the T-34 had a welded, not riveted, hull.

In the end, the Germans and Italians were willing to overlook the P40’s shortcomings—the armor being the main one—as they were badly losing the war. An Italian medium tank, it was an oddity and too few in number, but still a threat to Allied counterparts on a tank-per-tank basis.

It also arrived far too late to affect the outcome of the conflict, and it’s unlikely the P40 would’ve made much of a difference had it arrived sooner, although it could have given British tank crews a terrible time in North Africa had the Italians begun production in 1940 or 1941.

By late 1943, the war had decisively shifted onto the European continent and in the direction of an Axis defeat.